Everything you need to know about Rex Tillerson, Donald Trump's choice for secretary of state 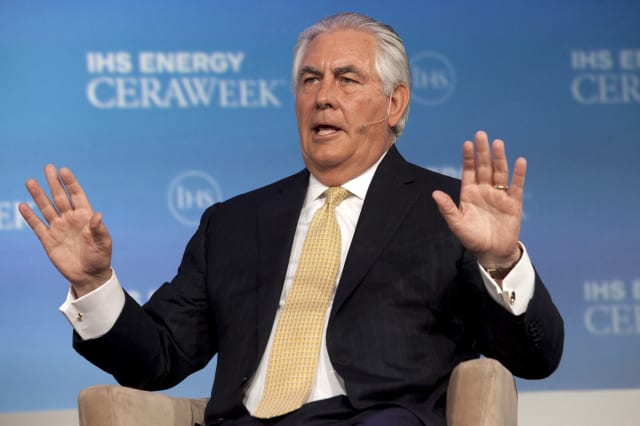 Another day, another new potential addition to Donald Trump's administration. Trump has announced that Rex Tillerson is his pick for secretary of state - another unusual choice from the president-elect.

If you're not quite familiar with who Tillerson is, don't worry, because here's everything you need to know about the man who could be leading US foreign policy.

Tillerson hails from Wichita Falls, Texas, and ever since he graduated from the University of Texas at Austin in 1975 he's been working at ExxonMobil Corp.

He joined the company as a production engineer and was groomed for an executive position from the start. He held posts in the company's central US, Yemen and Russian operations, and in 2006 he won the battle to succeed former Exxon CEO Lee Raymond.

How did he lead Exxon?

Under Tillerson's leadership, oil prices broke records and Exxon's profits helped make it the most valuable public company in the world.

It built up a security force totalling thousands of employees, direct channels with governments worldwide and a strong aversion to American sanctions or limitations on where it could operate - which perhaps gives an indicator as to Tillerson's stance on the role of government.

Tillerson has used Exxon's enormous profits to explore new regions for oil and gas and to invest in new acquisitions such as XTO Resources, a company that had helped pioneer drilling for natural gas in formations of shale in the US.

However, over time oil and gas has become more difficult and expensive to find and Exxon became forced to look in increasingly more hostile regions for supplies.

Where does Tillerson stand on trade?

"We are free-market, free-trade advocates," he said in a speech to the Council on Foreign Relations in 2012, declaring that the greatest boon for American energy security would be support for oil production and trading worldwide.

What does he think about the Middle East?

While he might advocate a hands-off approach to markets, Tillerson has backed continued American engagement with the Middle Esat.

After the Iraq war, Exxon agreed to develop a large project in still-unstable southern Iraq at terms that were less favourable to Exxon than most deals.

What is his relationship with Russia?

Many pundits are worried about the future secretary of state's close ties with Russia.

In 2011, Tillerson announced an expansive relationship with Russia's Rosneft which will spend years and billions of dollars developing technology to explore and produce oil and gas in icy waters in the Russian Arctic.

Tillerson has said it would be a mistake to step back from the oil and gas industry in Russia, despite revolutionary gains from shale fracking, which is poised to supply the US with far more of its own energy. "The question you have to ask is, 'Well then, who steps into that void?'" he said, suggesting it would be a "large consuming country" such as China.

What has Trump said about him?

Trump hailed him as "among the most accomplished business leaders and international deal makers in the world".

In a release from his transition headquarters in New York, Trump called Tillerson's career "the embodiment of the American dream". He said the ExxonMobil CEO rose through the ranks "through hard work, dedication and smart deal making".

Trump also said that, as the nation's top diplomat, Tillerson would be "a world-class leader" working on behalf of the American people.

Tillerson's selection is by no means set in a stone, and will potentially face a confirmation fight in the Senate.

However, the man himself said he was "honoured" by his selection and shares Trump's "vision for restoring the credibility of the United States' foreign relations and advancing our country's national security."

If confirmed by the Senate, Tillerson's test will be whether his corporate deal-making skills translate into the delicate world of international diplomacy.