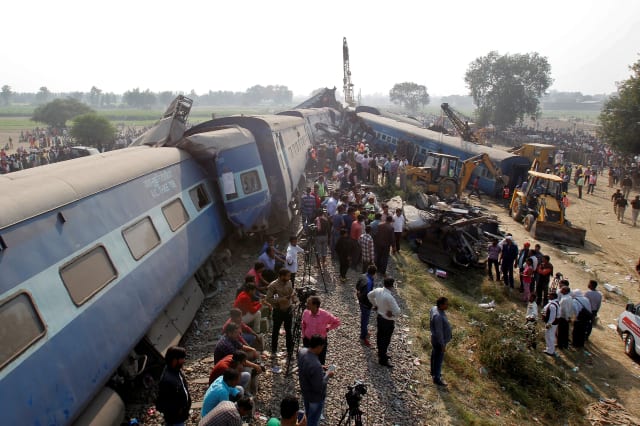 At least 90 people have died after a passenger train derailed in northern India.

Rescue workers used cutting equipment to free trapped survivors after 14 carriages left the track near Pukhrayan, a village near the industrial city of Kanpur.

Bodies were retrieved from the mangled, overturned coaches after the train derailed at around 3.10am local time.

More than 150 other people were injured as some coaches crumpled when they crashed into others, trapping hundreds of people inside.

Daljeet Chaudhary, a director general of police, said: "There are people trapped inside. We are being very careful in using the gas cutters."

He said the death toll was likely to rise as rescue workers are yet to gain access to some of the worst-damaged coaches.

Rescuers used cutting equipment to open the derailed coaches to reach those trapped inside, while cranes were also deployed to lift the coaches from the tracks.

Medical teams were providing first aid near the site while the more seriously injured were moved to hospitals in Kanpur, Chaudhary said. At least two dozen people suffered serious injuries in the crash.

Passenger Satish Kumar said the train was travelling at normal speed when it stopped suddenly.

"It restarted, and then we heard a crash. When we came out of the train, we saw a few coaches had derailed," he said.

Indian prime minister Narendra Modi expressed his concern over the derailment, taking to Twitter to express his sorrow.

Kanpur is a major railway junction and hundreds of trains pass through it every day. Several trains using the line have been diverted to other routes, according to a spokesman for Indian Railways.

Accidents are relatively common on India's sprawling rail network, which is one of the world's largest but lacks modern signalling and communication systems. Most crashes are blamed on poor maintenance and human error.

India's minister for railways, Suresh Prabhu, is issuing updates on the accident from his official Twitter account as well as offering information on compensation for the families of those killed and injured.

Trains are the popular mode of transport for millions of Indians and around 23 million passengers use India's vast railway network every day.

The country's worst train accident occurred in 1981 near Saharsa Bihar when a passenger train fell into the Baghmati River, killing nearly 800 people. Several other major train crashes have claimed hundreds of lives since then.