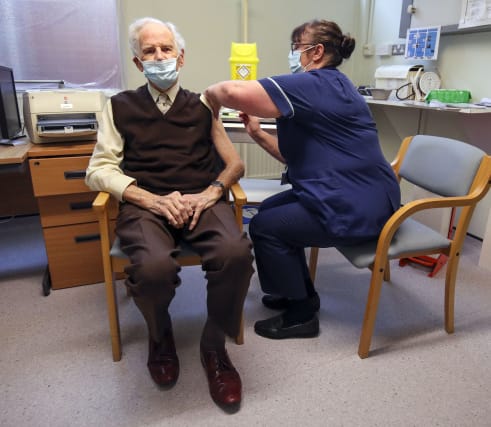 Family doctors across England have begun vaccinating their patients against Covid-19 as health experts issued fresh warnings about a rise in cases caused by Christmas socialising.

GP practices have started taking delivery of the Pfizer/BioNTech vaccine from central hubs, with the over-80s among those called up to receive the jab.

She said: “The vaccine is a fantastic opportunity to restore a degree of normality, for families and friends to reconnect, and for the country to get back on its feet.

“I would encourage anyone offered the Covid-19 vaccine to step forward when asked to do so. This is our opportunity to protect ourselves and each other.”

A consignment of Pfizer/BioNTech vaccine arrived at Feldon Lane Surgery in Halesowen, West Midlands, at 1.47pm.

The delivery from an undisclosed secure location elsewhere in the Midlands was among the first to family doctors across England.

Gerry and Maureen Hughes, aged 81 and 84, are thought to be the first patients in England to receive the Pfizer/BioNtech Covid-19 vaccine at a GP surgery.

The couple, from Halesowen, received their jabs on Monday afternoon at the town’s Feldon Lane Surgery.

Speaking to the media after having the vaccine, Mrs Hughes, a retired telephonist, said she now hoped to be able to see family members at Christmas.

“It means an awful lot,” she said.

“I can’t thank the people enough that have made this vaccine possible.

Mr Hughes, a former automotive industry manufacturing director, said: “I think people don’t recognise what goes on behind the scenes – and logistically, what they have achieved in bringing these vaccines to a surgery, I think is fantastic.”

It came as Health Secretary Matt Hancock told MPs that vaccines should still work against a new variant of coronavirus that is thought to be behind rising rates in south east England.

Elsewhere, care home residents in Scotland began to receive the Pfizer vaccine on Monday, while those in England’s care homes can expect to see roving teams administer the jab from later this week.

Dr Nikita Kanani, director of primary care at NHS England, urged all those expecting to receive the vaccine to be patient and wait to be called up by their GP.

“There’s a huge range of things that general practices are already doing so if we can ask for people to just wait a moment and wait to be contacted that would be very appreciated,” she told BBC Radio 4’s Today programme.

Some GPs on social media said their deliveries had been pushed back at the last minute – forcing reception staff who spent hours booking in eligible patients aged over 80 for Tuesday this week to call them again to reschedule.

GPs online said some have also reported delays with deliveries of other items to support designated sites such as IT equipment and supplies.

One Kent GP wrote on Twitter: “Having spent weeks organising these Covid vaccines and getting 975 patients booked in, we have been told they won’t be arriving on Mon as planned but Tues sometime. I have 80 patients booked in for Tues am.”

Another Kent GP, according to GP online, said his site had “hundreds of patients booked in” to start vaccinations on 18 and 19 December – but that there were now “uncertainties” over vaccine delivery dates.

Another in Merseyside wrote that his practice’s vaccine delivery time had been pushed back by 24 hours at the last minute. After a day of calling patients to book them in, he wrote: “We’ll have to ring them ALL again tomorrow.”

It estimates that four vaccinators can get through 100 patients in 200 minutes at eight minutes per jab – fast enough to vaccinate 975 patients in three 12-hour days.

GP leaders have warned that the requirement to observe patients for 15 minutes after the jab poses a challenge for some practices with limited space, especially while also observing social distancing rules.

Some GP surgeries have turned to their communities to ask for help, requesting outdoor marquees or tents that can be heated so the observations can take place outside.

It comes as experts issued fresh warnings about families and friends meeting for Christmas – which is widely expected to result in a spike in cases.

Under the rules, people will be able to form a “Christmas bubble” between December 23 and 27 made up of people from no more than three households.

She told ITV’s Good Morning Britain: “This is the worry about Christmas because once you enter somebody’s home, you’re probably going to get the virus if someone else there has it.

“The three things I’d say to people is, first, we have a vaccine right around the corner – Pfizer is already being rolled out, AstraZeneca is on its way.

“So within weeks people are going to be vaccinated and safe, who otherwise would be at risk.

“Secondly, NHS staff are exhausted, they are begging people to be cautious, to not get infected, because they’re the ones in the end who have to be showing up in hospital on Christmas Day, on Boxing Day and New Year’s and actually having to take care of everyone that comes through.

“And third, look at what happened in the States with American Thanksgiving.

“You only have to read the stories, look at the figures to see what happens if people aren’t cautious right now over the Christmas period.”

Gabriel Scally, professor of public health at Bristol University and member of Independent Sage, also urged people to think about whether it was sensible to meet indoors and said there should be “no hugging”.

He added: “Can you meet outdoors, can you go out for a walk together? Can you do something else?”

Asked by Good Morning Britain presenter Piers Morgan if gatherings should be happening at all, TV medic Dr Hilary Jones said: “My gut feeling is it shouldn’t. It’s asking for trouble.”

However, Professor Paul Hunter, from the University of East Anglia, said gatherings could be a “tolerable risk” and important for mental health, adding that shops and schools will be closed over the festive period and people will not be going to work, all driving down the R rate.

Boris Johnson’s official spokesman said there were no plans to review the Christmas guidance.