Scientists to trial combination of Oxford-AstraZeneca and Russian vaccines 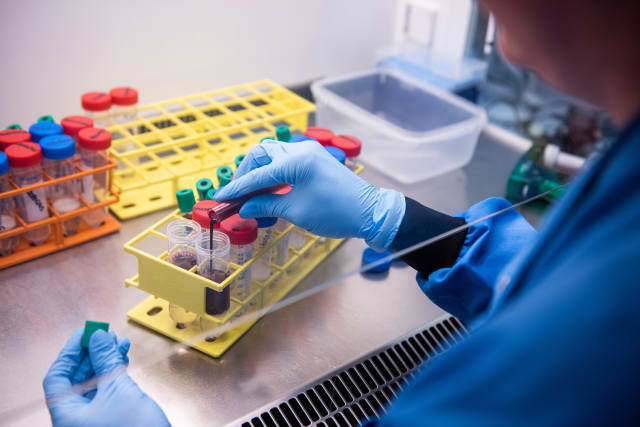 AstraZeneca is to join a trial exploring whether a combination of its Covid-19 vaccine candidate and the Russian Sputnik V jab can offer improved protection from coronavirus.

The pharmaceutical giant, which is developing the AZD1222 vaccine with Oxford University, said it would collaborate with the Russian Gamaleya Research Institute.

The trials will involve people aged 18 and over, AstraZeneca said on Friday.

They will help investigate the possibility of a combination of two vaccines boosting recipients’ immune response to Covid-19.

The Oxford-AstraZeneca vaccine is yet to be approved for use in the UK, with the country’s medicines regulator, the Medicines and Healthcare products Regulatory Agency (MHRA) still reviewing trial data.

Sputnik V, currently being made available to Russians in high-risk groups, was given regulatory approval by the Russian government in early August amid criticism after only being tested on several dozen people.

Both jabs are adenoviral vector vaccines that contain genetic material of the protein spike of Sars-Cov-2, the virus that causes Covid-19.

These types of vaccines are based on weakened versions of adenoviruses, which are a group of viruses that typically infect membranes of the eyes, respiratory tract, urinary tract, intestines and nervous system, and include the common cold.

They are a different class of jab to the Pfizer/BioNTech vaccine being rolled out in the UK, which uses mRNA technology that tricks the body into producing some of the viral proteins itself.

AstraZeneca said it was considering how to assess “heterologous combinations of different vaccines”.

The pharmaceutical company explained that vaccines often require more than one dose, an initial “prime” followed by a “boost”.

AstraZeneca said it was “working with industry partners, governments and research institutions around the world, and will soon begin exploring with Gamaleya Research Institute in Russia to understand whether two adenovirus-based vaccines can be successfully combined”.

The UK has secured 100 million doses of the Oxford-AstraZeneca vaccine.

The published interim phase three results of the vaccine’s trials found the jab protects against symptomatic disease in 70% of cases – with efficacy of 62% for those given two full doses, and 90% in those given a half, then a full dose.

Dr Stephen Griffin, associate professor in the School of Medicine at the University of Leeds, explained that adenovirus vaccines can become “a victim of their own success” after a first dose because it triggers an “anti-vector” response in the body that reduces the efficiency of a second jab.

He said this might be a factor in the Oxford-AstraZeneca vaccine showing lower efficacy at a higher dose.

Dr Griffin said: “Even though our immune systems haven’t seen the chimpanzee adenovirus before, the first viewing at the higher dose potentially generates sufficient responses to lessen the effect of the second boost.

“The Sputnik vaccine avoids this issue by using two different human adenoviruses for the first and second shot, meaning the anti-vector response is far less likely to have a negative impact.

“Thus, combinations of these vaccines will give more flexibility in terms of regimens going forwards, and it is also encouraging to hear that combinations of adenovirus and RNA vaccines are planned.

“The importance of a second jab should not be underestimated as it is important for the longevity, specificity and effectiveness of the response to most vaccines.”

Rock band You Me At Six celebrate chart success

Mark Wright opens up about his family’s struggles with coronavirus