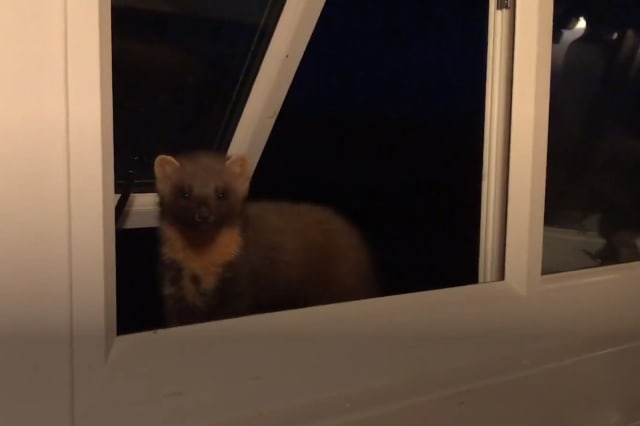 A cheeky pine marten surprised a wildlife lover - by peeking in through a window at a rural retreat.

Neil Bletcher was staying at his holiday home in Ardnamurchan, Scottish Highlands when the tiny woodland creature, which he named 'Spotty Cheek', made a surprise appearance.

Spotty Cheek is one of three kits born in spring last year, and Neil has built up a rapport with the tiny critter.

The IT worker, from Bridge of Weir, Renfrewshire, has regularly visited Ardnamurchan for more than 30 years and has a keen interest in the local wildlife, which also includes badgers, sea eagles and elusive wild cats.

Neil said: "I knocked on the window and there's one called Spotty Cheek which appeared.

"It was born about a year-and-a-half ago and I've called its mother 'Buttons'.

"It comes running up and I sometimes leave a wee egg on the porch.

"I sat around two feet from it - it didn't mind.

"The pine martens are really friendly.

"They sit and look at you.

"It's good to have that interaction with them.

"We also get badgers.

"You can just sit out on the porch and you see them.

"Normally if I'm sitting at the dining room table with the porch light on I can see them arrive."

He said pine martens have been making a comeback in the area after a reintroduction programme to control non-native grey squirrels - leading to a resurgence in native red squirrel numbers.

Neil said: "They've done a lot of reintroduction of pine martens in recent years to control the grey squirrel population.

"Where they've introduced them the greys have disappeared and the reds have started coming back, but if people have chickens and a pine marten gets into a coop it'll not just kill one hen but all of them."

He is now considering setting up a night vision camera to capture their movements after dark.

Neil added: "Pine martens were nearly wiped out by gamekeepers and farmers shooting them and were once so rare, but have made a comeback and are doing really well.

"You see them a lot more now.

"I think the forestry plantations might've helped as well as they can hide among the trees.

"I saw my first pine marten about 35 years ago up there and it was something special."