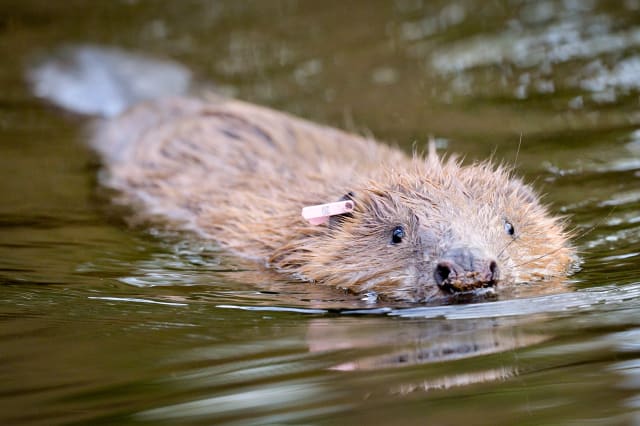 Beavers have built their first dam in Exmoor in more than 400 years, following river restoration work by the National Trust.

The semi-aquatic rodents, which constructed their dam at the Holnicote Estate near Minehead, are the first to be released into the wild by the trust in its 125-year history.

Footage captured on wildlife cameras shows the animals gnawing nearby trees and collecting vegetation to create a dam across small channels that run through the Somerset estate.

Rangers described the beavers as "ecosystem engineers", as nine months after they were introduced to slow the flow of water through the landscape and improve river quality, they have created an "instant wetland".

Their construction allows for deep pools of water which offer animals shelter from predators and a place to store food, and turns the surrounding land into a mosaic of nature-rich habitats.

Beaver dams, ponds and channels help human communities too – by preventing flooding through slowing, storing and filtering water as it flows downstream.

Ben Eardley, project manager at the National Trust, said: "It might look modest, but this beaver dam is incredibly special – it's the first to appear on Exmoor for almost half a millennium and marks a step change in how we manage the landscape.

"What's amazing is that it's only been here a few weeks but has created an instant wetland.

"We've already spotted kingfishers at the site, and over time, as the beavers extend their network of dams and pools, we should see increased opportunities for other wildlife, including amphibians, insects, bats and birds."

He added: "The recent rain we've had is a reminder of the significant role beavers can play in engineering the landscape.

"As we face into the effects of climate change and more frequent extreme weather events, natural interventions like this need to be part of the solution."

Beavers became extinct in the 16th century after they were hunted for their meat, fur and scent glands, but since the early 2000s, they have been reintroduced at a handful of sites in Britain.

Nature group Rewilding Britain said a massive increase in restoring and connecting habitats is needed to help save wildlife forced to move because of climate change, and the reintroduction of beavers is key to helping with this.

The beavers at Holnicote were relocated from wild populations on the River Tay catchment in Scotland, under licence from Scottish Natural Heritage.

They settled into a specially-built 2.7-acre enclosure on the estate in January and have been monitored by National Trust and Exeter University staff and volunteers since.

The project is part of the trust's Riverlands programme which aims to revive UK rivers by boosting wildlife, water quality, community engagement and tackling the effects of climate change.

A separate five-year trial on the River Otter in Devon was also recently hailed a success by the Government which is now considering a national strategy for the reintroduction of beavers.

Donations to the programme can be made on the National Trust website: www.nationaltrust.org.uk/appeal/riverlands-appeal.