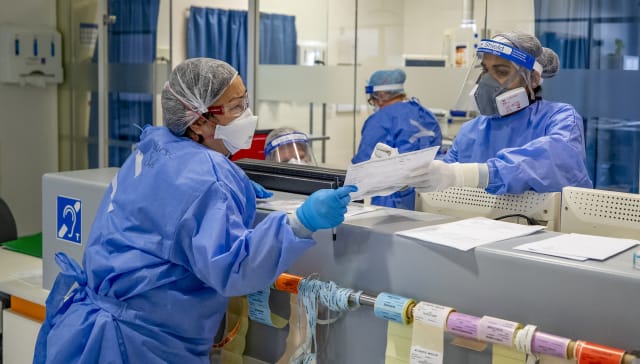 Supply contracts designed to top-up the country’s stockpile of personal protective equipment (PPE) failed at the start of the coronavirus crisis, according to a procurement expert.

The National Audit Office (NAO) found in a report that the UK spent £10 billion extra in inflated prices for safety kit due to an “inadequate” stockpile and a surge in global demand.

The Government spending watchdog’s study concluded the country’s stockpiles were not equipped for a coronavirus-style pandemic and there were limited supplies of key items, with not enough gowns to provide even a single day’s protection to health workers and only seven days’ worth of aprons.

Mark Roscrow, chief of trustees for the Healthcare Supplies Association, said the Government’s plan of having “just in case, just in time” contracts as a work-around for paying for mass stockpile storage did not work after the first wave hit the country in the spring.

He told BBC Radio 4’s Today programme: “Unfortunately some of those contracts didn’t work for a variety of different reasons, and that was part of the problem in getting PPE at the time that Covid struck.”

Mike Adams, England director at the Royal College of Nursing, said nursing staff had been put in the “terrifying position of having to work in potentially life-threatening environments with inadequate protection” during the first wave.

“We heard stories of masks, when available, being flimsy, poorly fitting or years out of date and of staff having to share disposable visors,” he said.

The NAO, in its study published on Wednesday, discovered providers paid “very high prices” for PPE due both to global demand and a ban on health-related exports in some countries, with the Government paying £10 billion more by July 2020 than it would have based on 2019 prices.

The auditor found procurement chiefs were forced to fork out 166% more for respirator masks and saw mark-ups of 1,310% on the cost of body bags.

Mr Roscrow, asked about the difficulties faced in buying fresh stock, said: “There were a number of problems. Initially, there was the scramble to try and get PPE, and we know that demand was huge and that most of this product was coming from China and China at the time had Covid and therefore was not able to turn on the volumes of product that was needed.

“There was worldwide demand for this, so there was the classic supply-and-demand conundrum, and that’s what drove price and the lack of availability.”

He said Chinese factories kicking back into gear, along with domestic manufacturers “stepping up to the plate”, helped ease supply issues.

The Government, he said, has since told procurement officers that 70% of the PPE currently required is being sourced from within the UK.

“Once it recognised the gravity of the situation… the price of PPE increased dramatically, and that alone has cost the taxpayer around £10 billion.”

Meg Hillier, chair of the Commons Public Accounts Committee, accused ministers of being “far too slow” to respond and said they were left paying “through the roof” for the frontline equipment.

Labour shadow health minister Justin Madders said: “There is no doubt that a significant reason for the shortage was the Government’s failure to prepare properly and take on board warnings about PPE stockpiles.”

She said: “As the NAO report recognises, during this unprecedented pandemic all the NHS providers audited ‘were always able to get what they needed in time’ thanks to the herculean effort of Government, NHS, Armed Forces, civil servants and industry who delivered around five billion items of PPE to the front line at record speed.

“We set up robust and resilient supply chains from scratch and expanded our distribution network from 226 NHS trusts to over 58,000 health and care settings.”

The Department of Health and Social Care said only 0.49% of all the purchased PPE tested to date had been found to not be fit for purpose for Covid-19.

Initiative launched to combat anti-black racism in the music industry