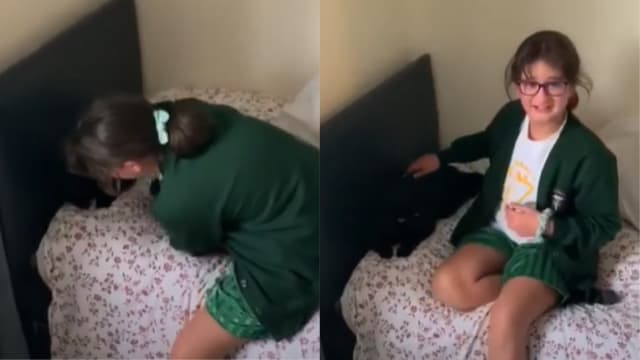 A 10-year-old girl from Surrey has been reunited with her cat after it had been missing for nine months.

Katya Harmon, from Woking, was filmed welcoming her cat Timmy home after Cats Protection was able to find him thanks to his microchip.

After a difficult year for the family, in which Katya's father Perry died of cancer, Katya's mother Svitlana Harmon said Timmy's return had "brought some light back".

Ms Harmon said: "I had just taken Katya to school when I received a totally unexpected call from Cats Protection. I had given up hope of ever receiving such a call. Timmy was coming home. It was almost unbelievable.

"I knew that Katya would be overjoyed to see Timmy. That was when I hit on the idea of filming that special moment, to capture Katya's reaction to finding Timmy hiding on her bed."

Ms Harmon said: "If it wasn't for that microchip, we wouldn't have Timmy home with us now. He won't leave Katya's side and she is besotted with him.

"We've had it hard this year, like so many people... then I had a miracle call from Cats Protection. It really brought some light back into our world."

Pauline Welch, welfare officer for Cats Protection's Woking and District Branch, said: "We had a report from a lady who had been feeding a suspected stray cat for a couple of months.

"I went round and scanned him for a microchip, which he had thankfully."

Cats Protection's Christmas campaign will highlight the importance of microchipping pets, with the charity claiming that 26% of owned cats in the UK are not microchipped.