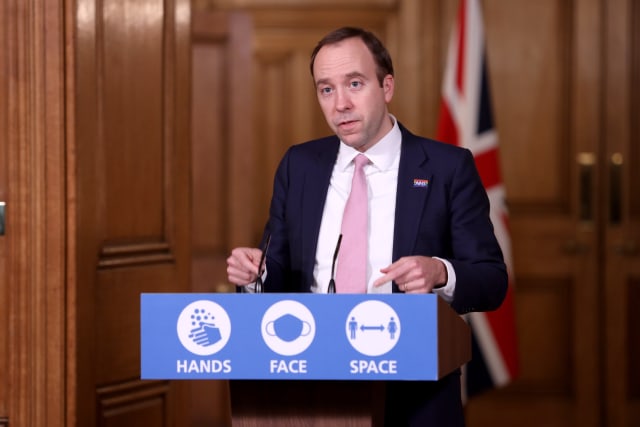 The second peak of coronavirus is “flattening” but the public must “keep our resolve” for the rest of the lockdown to prevent it rebounding, according to the Health Secretary.

Matt Hancock said it was still too early to say what contact people will be able to have over Christmas and what additional restrictions may be required after lockdown is eased.

Speaking with Mr Hancock at a Downing Street press conference, professor Jonathan Van-Tam, deputy chief medical officer for England, also urged caution and suggested any gains from the second national lockdown could be quickly lost as it takes “just seconds” for the virus to spread.

But referring to the “ray of light” that may be provided by a vaccine, the Health Secretary confirmed that he has formally asked the UK’s regulator to assess the Pfizer/BioNTech coronavirus vaccine for use here.

He said the consideration by the Medicines and Healthcare products Regulatory Agency (MHRA) of the vaccine is “another important step forward in tackling this pandemic”.

Addressing the Downing Street press conference on Friday, he said the latest infection figures are “promising” and added that “they show that the second peak is flattening”.

Prof Van-Tam and NHS England national medical director Professor Stephen Powis both joined Mr Hancock remotely for the briefing, as they are self-isolating.

Prof Van-Tam said he was isolating “due to a household contact” while Prof Powis confirmed earlier this week that he was doing so after a member of his household tested positive for coronavirus.

He said those contacts turn to infections five to seven days later and then hospitalisations a week after, adding: “You could lose this in just a few seconds.”

He appealed to people to “keep up the pressure on this virus and push down on it as much as we can right to the end of the period (of lockdown)”.

The Government said a further 511 people had died within 28 days of testing positive for Covid-19 as of Friday, bringing the UK total to 54,286, while another 20,252 lab-confirmed cases of coronavirus were reported.

Warning that infection rates will pick up again if the public ignores any guidelines put in place around Christmas, Prof Van-Tam said there is a “dual responsibility” for people to follow the rules.

“There is no magic number about how many days it is going to cost us,” Prof Van-Tam told the No 10 press conference.

Earlier this week Public Health England said that Scientific Advisory Group for Emergencies (Sage) guidance had suggested that for every day of greater freedom five days of tighter measures could be needed.

Mr Hancock said “it’s still too early to tell” what will happen after December 2 when England’s lockdown is due to end.

He said: “Over Christmas I know how important it is that we have a system in place, a set of rules that both keeps people safe but also allows people to see their loved ones.”

He added: “I just think it would be such a boost to the whole of the UK if the four nations can come together and agree a set of arrangements which are safe, careful and sensible but also allow families to see each other at Christmas.”

Welsh First Minister Mark Drakeford has said he is “generally hopeful” an agreement can be reached between the UK’s four nations regarding Christmas plans.

Mr Drakeford said “there are no sticking points, there are no disagreements” so far in the discussions, more of which are due to take place next week.

Issues being talked about include travel between the nations, how long any easing of restrictions might last and to what extent households may be allowed to mix.

Northern Ireland will enter a two-week circuit-breaker next Friday and Scotland has placed two million people in its toughest level of restrictions for three weeks.

On Friday, the Office for National Statistics (ONS) said there were “substantial differences” in Covid-19 infection rates across England.

Data from November 8 to 14 suggests the overall national infection rate for England is similar to the week before but there are stark regional divides with rising rates in primary-school-aged children.

The ONS said infection rates have continued to increase in London, the east of England and the south east, but appear to be decreasing in the north west and the East Midlands.

Sage said the reproduction number – or R value – for the whole of the UK had dropped to between 1 and 1.1.

What were the highlights from this year’s I’m A Celebrity… Get Me Out Of Here?

Winner crowned in I’m A Celebrity… Get Me Out Of Here!