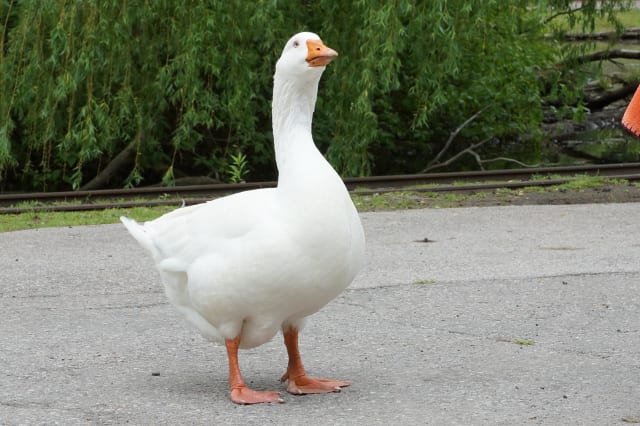 A farmer whose animal-themed social media channels have been a haven to many during lockdown has thanked his followers for their "overwhelming" support after the death of his goose.

Chris Franklin, 63, and his wife Helie Franklin run , a charity in Devizes, Wiltshire, which helps young people learn about the countryside, agriculture and rural crafts – and provides a home for 250 farm animals.

During lockdown, the centre's social media output has proven a welcome distraction for many people online. Caenhill has 75,000 followers on Twitter and 23,000 on Instagram. It even won a prize for digital innovation at the British Farming Awards earlier this year.

Amongst their animals, Cuthbert – the farm's mascot – had proved particularly popular.

But following a fight with two other geese on the farm, Cuthbert died on Sunday.

"He became poorly and sadly passed away in my arms," Mr Franklin told PA.

"Cuthbert became a friend to many throughout the world and the response to his death has been overwhelming – over 4,000 messages of condolences from around the world."

The messages have been particularly meaningful for Mr Franklin, who said Cuthbert had bonded to him ever since he hatched and was "like my best friend".

"The bond was very strong and he was always rushing out of the rush hour to greet me for a cuddle," Mr Franklin said.

The centre is now planning to create a pond in their sensory garden in Cuthbert's honour, which will be opened for care homes and young people to visit next year.

The 70-acre farm, which is owned by Wiltshire Council, was once run by Mr Franklin's father Ken, but parts of it fell into disrepair following his retirement in 2002.

Mr and Mrs Franklin have set about restoring it to its former state, with help from their daughter Kara Robertson and friend Caroline Le Bourgeois, but life has been tough since the start of the pandemic.

"It has been very challenging through lockdown as funding has been cut back and, of course, limited help," Mr Franklin said.

"My friend Caroline moved in to help with feeding and the social media, which has been a lifeline. People have been very generous in donating, buying merchandise or requesting shout-outs from their favourite animals.

"The feedback during lockdown has been humbling and, to many, the daily farm rush hour and farm antics have been a source of wellbeing, fun and hope."

Each morning the farmer posts "rush hour", the moment he releases his collection of ducks, chickens and more from the barn in which they sleep.

Such is the farm's following that Mr Franklin himself has now developed fame of his own.

"People have called me the new Johnny Morris," he said. "I am called 'the Chatty Farmer' on Twitter."