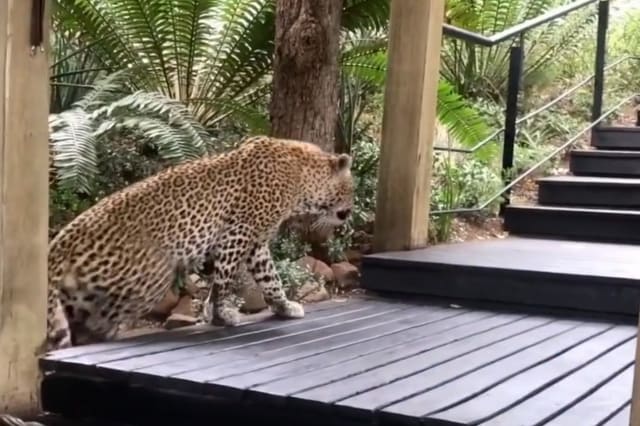 Diners were stunned into silence as a leopard decided to take a stroll around a restaurant in South Africa.

Footage filmed by Erika Wiese at the Singita Ebony Lodge hotel in Mopani shows the wild animal weave in and out of tables as diners and staff watch on in silence.

Wiese said: "Myself, my uncle and two of my closest friends continued chatting on the deck after breakfast. The rest of the family had gone to their rooms to rest before the afternoon game drive.

"Vervet monkeys are one of the best ways to know there is a predator around, by listening to their alarm calls. This particular morning, vervet monkeys alerted us to the presence of a leopard that made its way onto the upper deck, crossed the lower deck and then made its way from the lodge to remain undetected.

"The leopard was seen stalking a bushbuck in the riverbed in front of the lodge earlier. Singita's staff are well-trained to deal with encounters of this kind and have strict safety protocols in place to ensure the safety of both staff and guests in these situations. We were, therefore, able to remain calm, silent and in awe of the beautiful creature that was so close to us.

"We felt complete awe, reverence, respect and gratitude. What a rare experience to have such an encounter with a leopard. The situation proved that wildlife and people can live and interact with each other in harmony and respect.

"The sighting ended with the leopard strolling calmly away from the deck area and out of sight towards the bushbuck, who you can hear alarm calling at the end.

"This was extremely rare for me and all I can say to someone in that situation is to stay calm and respectful."