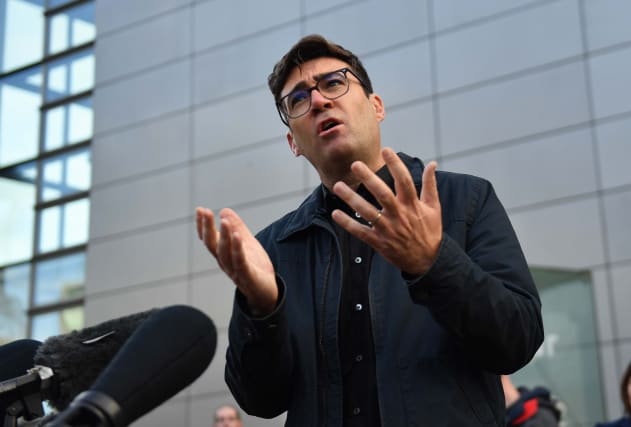 Greater Manchester will be subjected to Tier 3 coronavirus restrictions from Friday following more than a week of negotiations with central Government.

Here, the PA news agency looks at how the scenario unfolded.

England’s deputy chief medical officer Professor Jonathan Van-Tam tells a briefing that while cases are rising fastest in northern England, it is of “concern” that they are “heating up” in more parts of the country.

Temporary Nightingale hospitals in Manchester, Sunderland and Harrogate are asked to mobilise over the next few weeks to be ready to accept patients if needed.

Labour leader Sir Keir Starmer calls on the Prime Minister to impose a short circuit-breaker lockdown across England to bring the coronavirus resurgence under control.

As the three-tier system comes into effect, Government health officials are expected to discuss with councillors in Greater Manchester and Lancashire whether to classify the areas as Tier 3 – the most severe.

But Greater Manchester mayor Andy Burnham brands the Tier 3 restrictions “fundamentally flawed” and says “we won’t accept it”, later threatening legal action if the move is imposed by Whitehall despite his opposition.

Mr Burnham accuses the Government of treating the North with “contempt” as a row erupts over proposed coronavirus lockdown restrictions in the area.

He also claims that England’s deputy chief medical officer Prof Van-Tam told regional leaders that only a national-style lockdown was sure to have an impact on the rising number of Covid-19 cases.

Foreign Secretary Dominic Raab accuses Mr Burnham of trying to “hold the Government over a barrel” by resisting tougher restrictions and urges him to “do the right thing by the people of Manchester”.

The Prime Minister urges leaders in Greater Manchester to “reconsider and engage constructively” over Tier 3 restrictions but says he will intervene if an agreement cannot be reached.

At a Downing Street press conference, Mr Johnson says local measures were necessary as he sought to avoid another national lockdown but added he “cannot rule anything out”.

Mr Burnham said no meetings had taken place since Thursday morning and urged in a joint statement with council leaders that “we are ready to meet at any time”.

Downing Street on Saturday indicated a call had been scheduled for the following morning after a message was left with Mr Burnham.

Politicians continued to clash in interviews on the Sunday morning political shows.

Mr Burnham accused the Prime Minister of having engaged in an “exaggeration” of the severity of Covid-19 in the region during a Downing Street press conference.

“It’s a serious situation but I don’t think it was the situation that was described by the Prime Minister on Friday evening,” the mayor told the BBC’s Andrew Marr Show.

Senior minister Michael Gove told Sky’s Sophy Ridge On Sunday: “I want to reach an agreement with the political leadership in Greater Manchester.

“I want them to put aside for a moment some of the political positioning that they’ve indulged in and I want them to work with us in order to ensure that we save lives and protect the NHS.

“Instead of press conferences and posturing, what we need is action to save people’s lives.”

Communities Secretary Robert Jenrick warned local leaders they had until midday the following day to strike a deal with Government.

The ultimatum came after anger among some of those involved in the negotiations at what they said was the use of “selective statistics” by the Government to raise concern about the public health situation in the region.

Figures in London and Manchester continued to talk even after the noon deadline for negotiations had passed.

Speaking to reporters outside Bridgewater Hall in Manchester later that afternoon, Mr Burnham insisted the Government “walked away” from negotiations at around 2pm and said that local leaders were not offered enough to protect people through the “punishing” winter ahead.

He said civic leaders were prepared to reduce their bid for financial support to £65 million – a figure he described as the “bare minimum to prevent a winter of real hardship”.

He added: “In summary, at no point today were we offered enough to protect the poorest people in our communities through the punishing reality of the winter to come.”