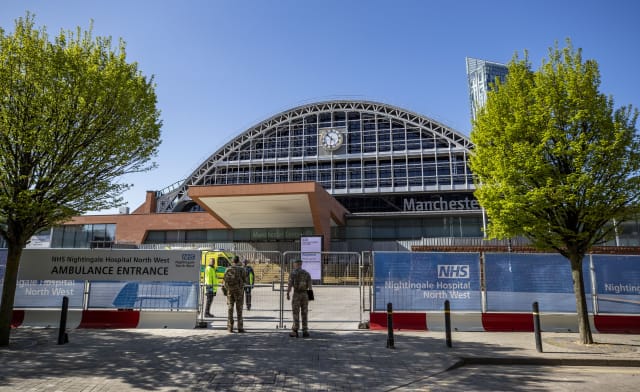 The Government has said tougher coronavirus restrictions are needed in Greater Manchester because the region’s intensive care capacity could be overwhelmed by Covid-19 within weeks.

But leaders in the area were angry about the Government’s use of “selective statistics” and said the area’s system can cope.

– What is happening in Greater Manchester?

Greater Manchester will be placed under stricter coronavirus controls after talks between the Government and civic leaders concluded without an agreement.

The region is to move into Tier 3, which would mean a ban on households mixing, including in private gardens or outdoor hospitality settings, while pubs and bars will be forced to close unless they serve meals.

Ministers had warned that the restrictions were necessary before the region’s intensive care units (ICUs) became overwhelmed.

– What has the Government said?

Communities Secretary Robert Jenrick issued a statement on Monday night warning that the Government had no choice but to act because of the deteriorating situation in the region.

He said there were now “more Covid-19 patients in Greater Manchester hospitals than in the whole of the South West and South East combined”.

A Downing Street briefing for journalists in Westminster also suggested Greater Manchester’s intensive care capacity could be overwhelmed by Covid-19 within weeks.

– Why has this angered leaders in the region?

Some involved in the ongoing negotiations were angered at what they said was the use of “selective statistics” by the Government to raise concern about the public health situation in the region.

Professor Jane Eddleston, Greater Manchester’s medical lead for the coronavirus response, also insisted the system can “cope” and that they would “bring more beds into play”.

Prof Eddleston said despite the “stark” figures on hospital admissions and coronavirus cases given by the Prime Minister’s official spokesman earlier on Monday, extra capacity would be available.

– Is Greater Manchester nearly at capacity?

It is not clear how many of the ICU beds in Greater Manchester are filled because data on intensive care use is not routinely published.

But the Health Service Journal has reported that the region has around 200 patients in critical care, compared with 300 at the height of the first peak.

The latest Government figures show there were 167 Covid-19 patients in mechanical ventilation beds and 1,817 in hospital across the North West on Monday.

This is compared with 528 mechanically-ventilated Covid-19 patients and 5,402 in hospital across England.

– What would happen if all the ICU beds fill up?

Prof Eddleston said the region had “detailed escalation plans” to create more beds if the current capacity of ICU beds is filled up.

More beds can be opened, staff drafted in, patients with other conditions could be transferred to other hospitals to make space and the temporary Nightingale hospital in Manchester is also being mobilised.

– Is there enough staff to open new beds?

Consultant anaesthetist Dr Helgi Johannsson, council member at the Royal College of Anaesthetists, told the PA news agency that staff could be redeployed from other specialities to look after Covid-19 patients needing intensive care.

He said that the NHS had managed to cope during the first wave but warned that there could be potential problems if large numbers of staff have to self-isolate which could leave holes in essentials rotas that need to be filled.

Dr Johannsson said this could mean cancelling elective surgery to fill the gaps which will add to the already large backlog, with the number of people waiting more than a year to start hospital treatment at its highest level since 2008.