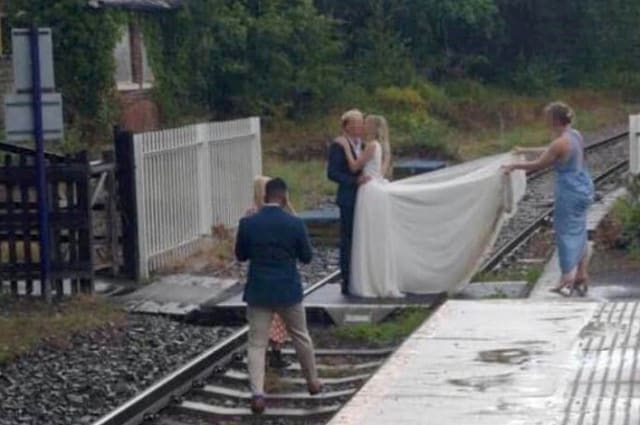 A bride and groom used a railway track - as a backdrop for their wedding photographs.

The young couple were caught on CCTV posing on a level crossing - with the snapper also standing on the live line a few feet away.

A bridesmaid in a turquoise gown held up the train of the mystery blonde's dress for the shots - taken near Whitby in North Yorkshire.

The shocking image was released by Network Rail to raise public awareness about a craze sweeping the country since lockdown was eased.

Spokeswoman Donna Mitchell said: "We don't know their identities. All I know is it was taken near Whitby, Yorkshire, in July."

Figures show there were 5,100 trespass incidents between June and September. Last month saw 1,239 - the worst in five years.

Allan Spence, of Network Rail, said: "These numbers show just how much work still needs to be done to educate people about rail safety.

"Our You vs Train campaign has been really successful getting the message to young people but adults still arent taking heed. Wedding photos or selfies on the track are just plain stupidity.

"We often warn families at this time of year as kids enjoy school half term holidays. But this time we are appealing to adults in particular.

"Please, make sure you know the rail safety basics and pass that knowledge onto your loved ones. Lead by example and stay off the tracks. No ifs, no buts - no tears."

Trespass is a cause of serious concern. The You vs Train campaign was created in partnership with British Transport Police two years ago.

Primarily concentrating on the problem of youth trespass, the number of incidents across the rail network involving young people aged 18 or under at key target locations has been decreasing year on year.

But the overall national figures are bucking the trend. For the first time in three years the total number of incidents in August and September 2020 have increased – by 12% and 17% respectively - compared to the same months in 2019.

Network Rail has issued a number of images caught on CCTV during the summer which show the variety of trespass incidents that have taken place across Great Britain.

These seem to show adults using the railway as a backdrop for photographs. Idiot models posed for a photoshoot on a live railway line at a level crossing between Cardiff and Swansea.

A woman can be seen strolling up and down the tracks and even sitting on them while a man sets up a camera angle to the side.

The scene was captured at Trenos level crossing near Llanharan in the South West, where trains travel up to 85mph.

Superintendent Alison Evans, British Transport Police, said: "The railway is not an appropriate or safe setting for a photographic backdrop - no matter how scenic the setting.

"Every time someone strays onto the rail network they are not only putting themselves at risk of serious, life-threatening injury, but also delaying essential journeys.

"Passenger and freight trains are still using the railway 24 hours a day, 7 days a week, providing much needed services of transporting people and goods. Please, stay off the track."

Ian Prosser, HM Chief Inspector of Railways, said: "We keep seeing people take unnecessary risks around the railway and this behaviour could result in fatal or life-changing consequences.

"These new statistics showing the increase is truly worrying. The hidden dangers on the railway are real.

"Each year hundreds take on the railway and lose and their actions have far-reaching and devastating consequences for their friends and family.

"We will continue to work with Network Rail and BTP to educate the general public about rail safety but also discourage any risky behaviour around the railway."

Glastonbury Festival cancelled for second year in a row

Jason Manford to host new quiz show for BBC One