No 10 urged to restart coronavirus restriction talks with Greater Manchester 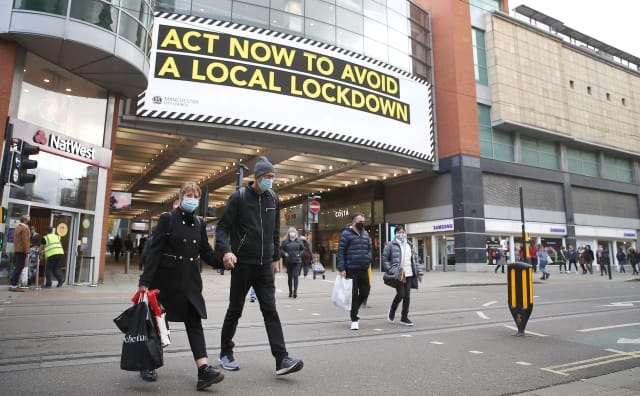 Downing Street is being urged to restart talks with Greater Manchester’s political leaders over the highest levels of coronavirus restrictions, amid warnings of rising deaths.

Boris Johnson was also under renewed pressure on Saturday to impose a short national lockdown known as a circuit-breaker to slow Covid-19’s resurgence.

The calls came as new controls including in Lancashire and London mean 28 million people – more than half of England – are living under heightened restrictions.

Both the Prime Minister and Labour have warned the situation in Greater Manchester is “grave”, while the region’s political leaders refuse to accept Tier 3 restrictions without greater financial support for businesses and residents.

But No 10 was understood to have not yet scheduled further talks for the weekend and mayor Andy Burnham said there had been no meetings since Thursday morning.

“We can assure the Prime Minister that we are ready to meet at any time to try to agree a way forward,” Mr Burnham and council leaders across the region said in a statement.

Shadow education secretary Kate Green called for an end to the “blame game” and for discussions to resume to get the region an adequate support package.

The Labour MP for Stretford and Urmston told BBC Radio 4’s Today programme: “That has not been offered by the Government. There hasn’t even been discussions over the past 24 hours between the Government and Greater Manchester’s leaders.

“We have to have our local leaders around the table with the Prime Minister or with his representatives to thrash out a deal today.”

Around 1.5 million more people woke up to Tier 3 restrictions when Lancashire joined the Liverpool region living under the severest controls, with pubs and bars closed unless they can serve meals and indoor mixing banned.

Jake Berry, the Conservative MP for Rossendale and Darwen, called for evidence to show the measures work, echoing concerns raised in Manchester.

“I think that spoonful of scepticism is because we’ve been in very similar measures since August and no one has really demonstrated to us the way out or how these measures are working,” he told BBC Breakfast.

Former health secretary Jeremy Hunt called for an end to the “public war of words” between local and national leaders, though he said there are “some justifications” for Mr Burnham’s arguments.

But the senior Conservative MP also indicated his support for the circuit-breaker lockdown suggested by Labour and the Government’s Scientific Advisory Group for Emergencies (Sage).

He said he had “sympathy” for Government adviser Sir John Bell’s view that the national measure might be needed, potentially even including a two-week closure of schools in England.

Sir John, the regius professor of medicine at the University of Oxford, told BBC Radio 4’s Today programme: “I can see very little way of getting on top of this without some kind of a circuit-breaker because the numbers are actually pretty eye-watering in some bits of the country and I think it’s going to be very hard to get on top of this just biting around the edges.

“If in the end we have to take kids out for two weeks, calm it all down, and then start ideally embedded in a much more rigorous testing regime then that’s maybe what we may have to do.”

The Prime Minister has been resisting calls to implement the measure over the October half term as he favours local measures, but said on Friday that he “can’t rule anything out”.

He also tried to increase pressure on Mr Burnham during a Downing Street press conference, and threatened to impose the measures if local leaders did not accept them.

But the mayor and council leaders across Greater Manchester, including a Conservative, responded by insisting they have done “everything within our power to protect the health of our residents”, and said people and firms need greater financial support before they accept the lockdown.

Tier 2 measures in London, Essex, York, Elmbridge, Barrow-in-Furness, North East Derbyshire, Erewash and Chesterfield mean people can no longer mix inside with those from other households, including in pubs and restaurants.

Wales also banned people in Tier 2 or 3 areas in England, as well as the central belt of Scotland and the whole of Northern Ireland, from entering as of 6pm on Friday.

And pubs, restaurants and cafes across Northern Ireland had to close their doors to sit-in customers.

– Sir John Bell said it is “possible” to get to one million coronavirus tests a day by Christmas, but said there would be significant logistical challenges.

– Mr Johnson said the UK is developing the capacity to manufacture millions of fast-turnaround tests for coronavirus which could deliver results in just 15 minutes.

– The Welsh Government was to meet to discuss a circuit-breaker lockdown and will announce any decisions on Monday.

– Some 15,650 lab-confirmed coronavirus cases were recorded in the UK on Friday, alongside 136 deaths.