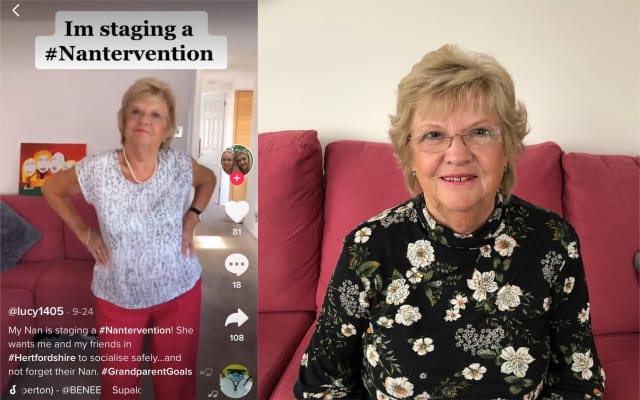 A grandmother has started a TikTok dance craze to encourage young people to practise social distancing.

Margaret Hansard, 78, is staging what she calls a "nantervention" to spread the message that young people who do not follow the guidelines could be at risk of passing the coronavirus on to their grandparents.

In the video, posted on her granddaughter Lucy's TikTok account, Mrs Hansard is seen performing actions to the song Supalonely by Benee, while captions read: "I'm staging a #Nantervention to get Hertfordshire's grandkids to socialise safely... And protect your nans!

Mrs Hansard, from Kings Langley in Hertfordshie, said the video was initially intended to spread awareness around her local area.

She told the PA news agency: "It's just to make the kids or the youths who are going out aware of distancing and things like that really, and making sure they know they can carry the germs and bring them home to grandparents.

Mrs Hansard's video has since been replicated by other grandmothers in the area, starting something of a craze on an app most popular among young people.

But she said she is not a regular user of social media, and does not spend time on Facebook or Twitter.

"I'm not very good with that," she said.

"I haven't got time, I'm busy with other things."

Despite images of young people attending parties and gathering in large groups appearing on the news, Mrs Hansard – who has four grandchildren – was clear that her video is not about judging those involved.

Instead, she said, it is aimed at making sure those who do go out and socialise do so safely.

"The youth, most of them are so lovely and they're so helpful," said Mrs Hansard, who volunteers with Age UK.

"If you were to fall over along the road I'm sure they'd run to pick you up.

"They've had a really hard time lately – since lockdown, they can't go out, you can't go out and socialise.

"It's hard for them and I'd like people to appreciate that. Most of them are so good.

"With my four grandchildren, all I want in life is for them to be safe, and I'm sure every other grandmother would feel that way."

Contestant eliminated from Bake Off during show’s first Japanese week

Guitarist creates fully working slide guitar out of a longboard

Great Barrier Reef loses half of its corals in 30 years