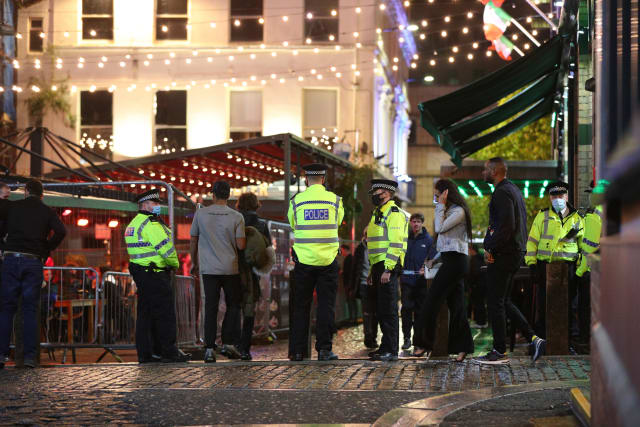 Civic leaders across north-west England are locked in negotiations with ministers as Boris Johnson prepares to unveil sweeping new controls in an attempt to stem the surge of coronavirus infections.

The Prime Minister will set out his three-tier strategy in a Commons statement, with areas in England labelled as medium, high or very high risk, which will inform the “appropriate interventions” needed in each area.

In Merseyside, which is expected to be subject to the most stringent Tier 3 controls, local leaders were battling for an enhanced package of financial support for businesses hit by the new measures.

Manchester meanwhile was resisting moves to require it to close pubs and bars, arguing that it should be placed in the less restrictive Tier 2 category.

Culture Secretary Oliver Dowden denied that ministers had been “panicked” into imposing economically damaging new measures at a time when deaths from Covid-19 were relatively low compared to the start of the pandemic.

While he said that he hoped controls would be able to be eased, he acknowledged that they may be required to remain in place until Christmas and beyond.

“The purpose of doing this is to ensure we get the virus under control so by the time that we get through to after Christmas we are in that position where it is under control,” he told Sky News.

“Indeed I hope it will be sooner than that.”

In a statement, seven local leaders from Merseyside including Metro mayor Steve Rotheram and Liverpool City mayor Joe Anderson said they had been told pubs, bars, betting shops, casinos, adult gaming centres and gyms would all have to close.

They said that they had made clear the support on offer – including the job support scheme announced by Chancellor Rishi Sunak for the Government to pay up to two thirds of the salaries of staff in businesses ordered to close – was inadequate.

Mr Rotheram said there was little they could do to challenge the decision, but that discussions had been continuing through the night on an improved support package.

“We were told we were going into Tier 3, no ifs, no buts. We can either expend energy on that or we can try and get a better deal,” he told the BBC Radio 4 Today programme.

“Some people like to shout at the wind but if they can’t change the direction of the wind it is important to shield people from its effects.”

In Manchester, City Council leader Sir Richard Leese said local leaders were still in discussions with the Government as to what restrictions should apply in the area.

Despite high levels of infections, he said they had made the case that Greater Manchester should be placed in Tier 2 as there was little evidence that pubs and bars had been responsible for the spread of the disease in the area.

“We have far more finely-grained data collected by our own directors of public health that seems to demonstrate that there is not a particular connection between bars and restaurants and the transmission of Covid.”

Adorable yellow iguana hitches a ride on top of a turtle

Keep your lenses perfectly clean with this pocket-sized eyeglass cleaner