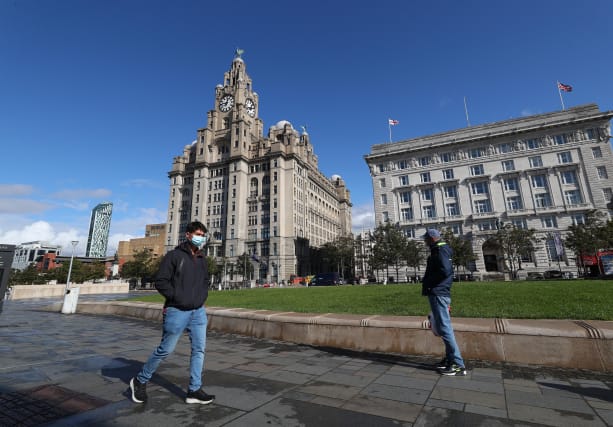 Boris Johnson has warned that rising coronavirus cases and hospital admissions are flashing like “dashboard warnings in a passenger jet” as he set out a new three-tier system of alert levels for England.

Pubs and bars across Merseyside will close unless they serve food and alcohol as part of a sit-down meal as the Liverpool city region moves into a “very high” Covid alert level under the new system.

Addressing a Downing Street press conference, Mr Johnson said cases nationally had gone up four times in four weeks, there are more Covid-19 patients in UK hospitals than on March 23 when the country went into lockdown, and deaths are rising.

“These figures are flashing at us like dashboard warnings in a passenger jet and we must act now,” he said but stressed he was taking a “moderate” and “balanced” approach to saving lives while trying to protect the economy.”

Mr Johnson pledged that “no one affected by this will be left to fend for themselves”, with the Government having previously announced new financial assistance.

“No one, least of all me, wants to impose these kinds of restrictions, erosions of our personal liberty, but I’m convinced as I’ve ever been that the British people have the resolve to beat this virus and that together we will do just that,” Mr Johnson said.

Earlier, the Prime Minister launched the three-tier system of local alert levels for England, with the Liverpool city region placed in the most serious “very high” risk category from Wednesday.

Mr Johnson told MPs that the coming weeks and months would “test the mettle” of the country as it faced a second wave of Covid-19 cases.

Under the new arrangements:

– The medium alert level will cover most of England and will consist of the current national measures, including the rule of six and the 10pm curfew.

Most areas which are already subject to local restrictions will automatically move into this category, as well as Nottinghamshire, East and West Cheshire and a small area of High Peak.

– The very high alert level will mean, at a minimum, the closure of pubs and bars and a ban on social mixing indoors and in private gardens.

Areas in the top tier will be able to impose extra restrictions, and in the Liverpool city region this will mean the closure of leisure centres, gyms, betting shops and casinos.

MPs will debate and vote on the measures on Tuesday and the new tiered system will come into effect on Wednesday.

At the Downing Street press conference, England’s chief medical officer, Professor Chris Whitty, said people in the South West, South East and the East of England should not be “lulled into a false sense of security” over current lower infection rates.

But he said the actions of people across the country in following rules such as social distancing had prevented case numbers and hospital admissions from being far worse.

Addressing the new measures in a joint statement, metro mayor Steve Rotheram, city mayor Joe Anderson and the leaders of Liverpool City Region’s six local authorities said it was made clear by ministers that Merseyside would be placed in the highest tier “regardless of if we engaged with them or not”.

The local leaders said they shared the Government’s “grave concerns” about the pressure on the region’s hospitals and had worked with Whitehall to negotiate a package of support for the region.

Liverpool City Region is so far the only area to be placed in the “very high” category.

The Prime Minister said talks were continuing with local leaders in the North West, North East and Yorkshire and the Humber about the approach there and the support available if they moved into the third tier.

“I know how difficult this is – they like us, like everyone in this House, are grappling with very real dilemmas.

“But we cannot let the NHS fall over when lives are at stake.”

He said authorities being placed in the “very high” alert level would gain extra support from Whitehall – including the possibility of military assistance to support local services.

There was £1 billion of new support on offer to local authorities across England, Mr Johnson said.

Measures would be kept under review, with a four-week sunset clause for areas facing the toughest restrictions.

Mr Johnson defended the approach adopted by the Government in attempting to keep much of the economy open while curbing the spread of the virus.

“This is not how we want to live our lives, but this is the narrow path we have to tread between the social and economic trauma of a full lockdown and the massive human and indeed economic cost of an uncontained epidemic,” he said.

Mr Johnson rejected suggestions that restrictions should be eased, with the virus allowed to spread among younger people but the vulnerable shielded.

The “bleak mathematics” indicated there would not only be an “intolerable death toll” from Covid-19, but the strain would impact other areas of the NHS, causing long-term damage, he said.

Labour leader Sir Keir Starmer said he was “sceptical” whether the Government has a plan to get control of the virus.

The Labour leader said: “The question today is whether the restrictions announced by the Prime Minister can bring the country back from the brink, whether they can regain control of the virus and provide the support and confidence that local businesses and communities need.

“That is how high the stakes now are.”

Prof Van-Tam said the virus had spread from younger age groups into the 60-plus age group in the North West and the North East, with similar patterns now being seen elsewhere.

The temporary Nightingale Hospitals in Manchester, Sunderland and Harrogate are now being mobilised to help with the spike in Covid-19 cases.

And there will be asymptomatic testing of NHS staff in high-risk areas – a move first promised by Health Secretary Matt Hancock in June.

James May: Happy coincidence my cooking show is released during lockdown

Make-up artist transforms herself into the ‘Corpse Bride’