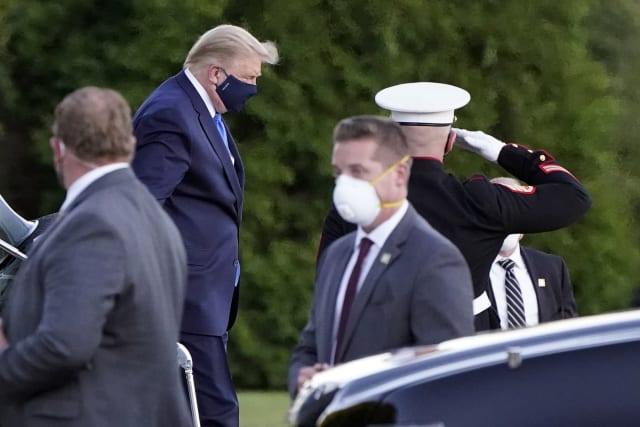 US president Donald Trump is doing “very well” and is in “exceptionally good spirits” as he remains in hospital being treated for Covid-19.

Giving an update outside the hospital on Saturday, Dr Conley said the president was fever-free, was not on oxygen and was not having difficulty breathing.

Mr Trump was taken by helicopter to the hospital “out of an abundance of caution” on Friday, and is expected to remain there for “a few days”.

The White House said the 74-year-old would work from the hospital’s presidential suite, which is equipped to allow him to continue his official duties.

Prime Minister Boris Johnson said he is sure the president will “come through” his treatment “very well”.

Speaking to reporters on Saturday morning, Mr Johnson said he rang the White House on Friday night and added: “I think obviously everybody’s wishing him and Melania the very best and hoping that they recover speedily and I’ve no doubt that he will, he’ll make a very strong recovery.”

When asked if he had any advice for Mr Trump, Mr Johnson added: “I think that he will be doing exactly what the doctors tell him to do and I’m sure he will be having the best care he can possibly get.”

Mr Trump walked out of the White House wearing a mask before boarding Marine One on Friday evening, and in a video on Twitter said: “I think I’m doing very well, but we’re going to make sure that things work out.”

The US has been left reeling by the unfolding events surrounding Mr Trump’s health troubles, with the presidential election only four weeks away.

The president announced his diagnosis in a tweet in the early hours of Friday, following a positive test from one of his closest aides, Hope Hicks.

First lady Melania Trump has also tested positive and has a “mild cough and headache”, according to the doctor, but the remainder of the first family, including son Barron, who lives at the White House, have tested negative.

The president’s re-election campaign said all events featuring Mr Trump and members of his family would either be postponed or go online, but that vice-president Mike Pence would resume campaigning as he had tested negative.

Meanwhile in the UK, Mr Johnson defended the current raft of local lockdowns and pleaded for patience in the struggle against the disease.

Liverpool, Warrington, Hartlepool and Middlesbrough became the latest regions to enter local lockdowns on Saturday, with it now illegal for households to mix indoors in those areas.

In an interview with the Telegraph, Mr Johnson called for people to be “patient” as the Government seeks to stifle a second wave of outbreaks.

More than a third of the UK population is living under heightened restrictions, and Mr Johnson has faced a revolt on his backbenches in recent days over the way ministers have introduced such local lockdowns without giving MPs a say.

But he said there was a “moral imperative” to bring in life-saving measures during what he called a “once-in-a-century event”.

Addressing the unpopularity of the 10pm pub curfew and other social restrictions, the Prime Minister told the paper he sympathised “with people who chafe at the restrictions”.

He added: “I think everybody is fed up – I just urge people to be a little bit patient.

“We will get through it and we will save a load of lives, and that’s really the best I can say.

“I think there is a moral imperative to save life where you can.”

In an interview with BBC North East and Cumbria on the eve of the “virtual” Tory conference, Mr Johnson appeared to blame the public for the current surge in cases.

He said the summer had brought with it a “sort of fraying of people’s discipline and attention” to the social distancing rules.

His comments come as yet more university students tested positive, with Northumbria University, based in Newcastle-upon-Tyne, saying that as of Friday it was aware of 770 cases, 78 of whom are symptomatic.

New figures showed the reproduction number, or R value, of coronavirus transmission across the country still remains above 1, and is continuing to creep up.

The data released by the Government Office for Science and the Scientific Advisory Group for Emergencies (Sage) shows the estimate for R for the whole of the UK – the rate at which the virus is spreading – is between 1.3 and 1.6. Last week, the R number was between 1.2 and 1.5.

Westminster continued, meanwhile, to be embroiled in its own coronavirus controversy as the Metropolitan Police announced it was investigating Margaret Ferrier MP for alleged law breaches after she took a train from London to Scotland knowing she had tested positive.

The Met said it is “conducting an investigation into potential offences” with the British Transport Police.

The probe comes after SNP leader Nicola Sturgeon said she had made it “crystal clear” to Ms Ferrier, who has been suspended from the party, to quit as an MP after she made a “monumental” error of judgment.