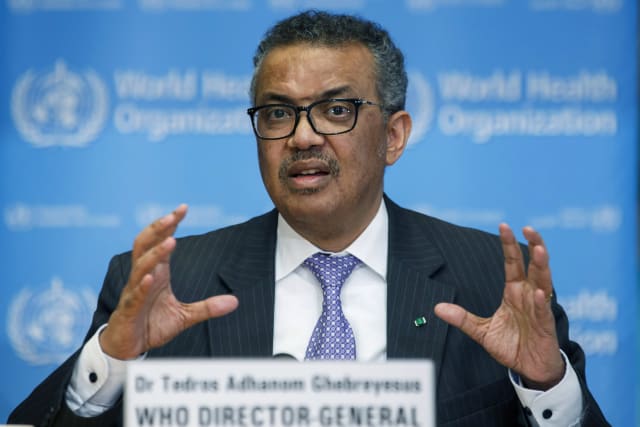 More lives will be lost and there is a risk of further “costly” lockdown measures if coronavirus transmissions are not kept in check, the World Health Organisation has warned.

WHO director-general Tedros Adhanom Ghebreyesus said that, while deaths remain at a “relatively low level”, the average number of daily cases in Europe is now higher than during the first peak of the pandemic.

Speaking at the 70th session of the WHO Regional Committee for Europe on Monday, Dr Ghebreyesus said Europe is not “out of the woods” yet.

He added: “Lives and livelihoods have been lost, the global economy is in recession and social and political fault lines have been exposed.

“The European region is no exception.

“Many of your countries have been the among hardest hit. We are by no means out of the woods.

“The average daily number of cases in the region is now higher than it was during the first peak in March.

“Fortunately, the number of deaths appears to be remaining at a relatively low level – for now.

“But every death is a tragedy, and there can be no room for complacency.

“If we do not keep transmission in check, more people will lose their lives, and there is the real risk of reintroducing so-called lockdown measures that have been so costly.”

Dr Ghebreyesus said countries need to prevent “amplifying events” such as gatherings at stadiums, nightclubs and places of worship which have been linked to “explosive outbreaks”.

He also said nations should protect the vulnerable, educate people and communities to use social distancing, hand hygiene and masks to curb transmission, and persist in “public health basics”.

These include testing, tracing and isolating cases as well as finding and quarantining their close contacts, he added.

Dr Ghebreyesus said that if countries do these things, they will be able to reopen their economies, societies and borders safely.

He added: “WHO is urging countries to focus on four essential priorities.

“First, prevent amplifying events. All around the world, explosive outbreaks have been linked to gatherings at stadiums, nightclubs, places of worship and other crowds.

“Second, protect the vulnerable, to save lives and reduce the burden on the health system of severely- and critically-ill patients.

“Third, educate and empower communities to protect themselves and others.

“Physical distancing, hand hygiene, respiratory etiquette and masks can all help to curb transmission and save lives – not in isolation, but together.

“And fourth, persist with the public health basics: find, isolate, test and care for cases, and trace and quarantine their contacts.

“Countries that do these four things, and do them well, can reopen their societies, economies and borders safely.”

She added: “At the moment, despite the case resurgence in Europe, we have not seen death rates as high as it was in the spring.

“This can be linked to a variety of reasons including larger proportion of cases among young people who tend to be less severely impacted; protections in place for the most vulnerable; increased testing; better care for severe patients

“As winter approaches, and other respiratory pathogens start to circulate including seasonal influenza, we can expect increased risks to older people at this time of year.”

Dancing On Ice 2021: Which celebrities will be taking to the ice?