Seagull shoplifts from the same store every day 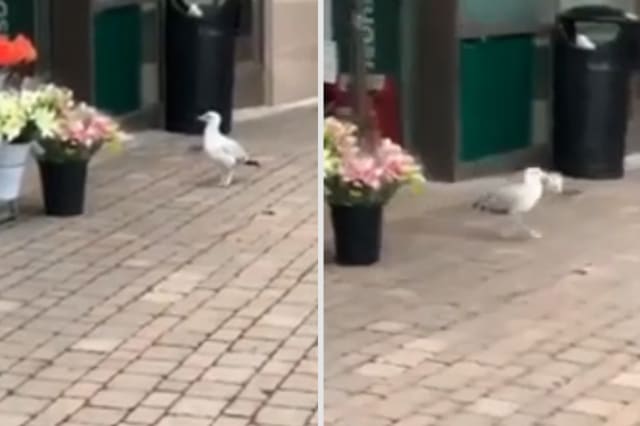 This video shows a seagull who carries out daily raids at a supermarket - staking the joint until it can run in and out unnoticed with stolen food.

The winged shoplifter - nicknamed Roger for his ability to 'dodge' the law - is regularly seen pacing near the shop at the quieter times of day.

Witnesses say it will case the Morrisons on the Channel Island of Jersey to check the coast is clear before entering.

It then makes a quick dart into the food aisle to help itself to fruit before making a quick getaway.

Witnesses say the brazen winged suspect has developed such a consistent robbing ritual it is obviously pre-mediated.

And it has now been caught on camera in a video that is going viral on social media.

Ruth Hewitson, 60, of Jersey, who works as security guard for G4S next door, said it arrives at the same time every day around 5pm.

She said initially no-one believed her so decided to film the gull in action in St Hellier as proof.

She said: "I do security next to the store and the first time I told someone they did not believe it, so I started filming him.

"He goes in every day about the same time, sometimes twice a day.

"If you look at the footage, you can see he knows exactly what he is doing and where he is going.

"He comes out with chopped apples and grapes and then crosses the road without a care in the world. Sometimes he goes back for more.

"It is so funny. He waits in no hurry until he thinks no-one can see him and then helps himself"

The bird – who apparently goes by the alias Roger because of his ability to dodge law enforcement – has repeatedly targeted the same convenience store.

Ruth added: "I showed the manager and he just laughed. I don't think they took much notice but maybe they should employ me for security purposes.

"The gull is so cool and nothing phrases him. It has just become part of his daily ritual.

"It has made everyone who has seen it happy and laugh and they have all thanked me for posting it."