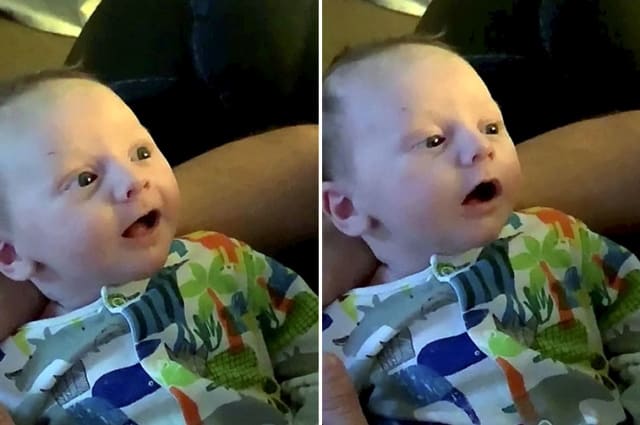 Charlie-John Taylor-Mullington shocked his parents when he replied to their greeting - and they caught it on camera.

Caroline quickly got her phone and filmed the interaction between insurance broker Nick and baby Charlie as he repeatedly said 'hello' to his proud dad.

Estate agent Caroline, from Willaston, Cheshire, said: "It was magical. We had tears in our eyes. We were just in utter shock!

"My husband Nick had Charlie in his arms and was just saying 'hello' slowly to him. I think he loves Nick's deep voice.

"Charlie was saying 'hello' back a few times and we just decided to film it as we couldn't believe he was really talking."

Usually babies speak their first word between 10 and 14 months old, so Caroline and Nick are excited to have two little geniuses on their hands.

Caroline said: "We had no idea of how quickly babies learn to speak when we had Lottie as we didn't have any other children to compare her progress to.

"When Charlie started speaking, we knew it was mega soon for him and definitely rare!

"Lottie absolutely adores her little brother. We're so proud of our kids. It's amazing having the pair of them.

"We keep watching the video of Charlie all the time - it makes us feel so proud and we have a strong bond with him so early.

"He has so many traits already and he's a real smiler too!"

Nick said: "It was a shock to say the least!

"I just had Charlie in my arms and he was responding to my voice - he looked up at me closely and then copied me.

"We couldn't believe what had just happened. I'm one proud daddy!"

It was filmed at their home on Friday August 21.