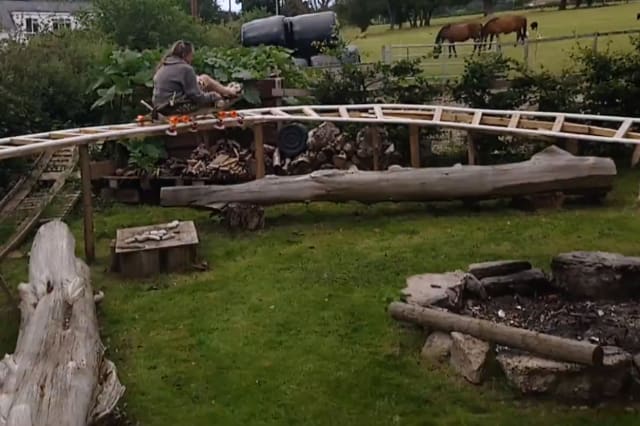 A madcap uncle made his young nephew's dream come true by building a roller coaster in his back garden - based on the 11-year-old's drawings.

Leigh Downing, 47, and his son Charlie, 20, used the sketches made by his nephew Calden Ashley to construct the 230ft-long big dipper.

Leigh and Charlie used plastic pipes for the rails and old bits of scrap metal and wood to make the frame of the coaster.

The inventive duo even used an old wooden chopping board as the seat of the ride which circles Leigh's back garden in Llandyrnog, Wales.

They built it as a surprise for Calden who was fed-up after being unable to see his friends over the summer holidays as a result of lockdown restrictions.

Former engineer Leigh said: "Calden has been roller coaster mad for as long as I can remember.

"Even before he was tall enough to ride, he was designing them on a computer.

"It all started a couple of years ago when I had an operation and was off work for a couple of months.

"I gave Calden a wooden marble rollercoaster kit I had when I was a child.

"He was so thrilled with it.

"My son Charlie built him a small wooden rollercoaster that he could ride.

"He was absolutely ecstatic with the end result, but a couple of years on had got a little bored with it.

"We hatched this latest idea during lockdown.

"We built it with a wooden frame for the structure, PVC pipe for the rails, and 462 wooden bearers that we mounted the rails on, all of which Charlie cut and filed a 40mm profile in. We did it all in eight days."

Charlie, who passed his maths GCSE when he was 11-years-old and skipped his A Levels to go straight to university to study maths and science, is a hobby mechanic.

Leigh, who has a background in engineering, added: "We said to Calden, you do the design. He designed it from start to finish including every twist, turn and bunny hop.

"We had to rein in his expectations. At first we thought we could do the drop two metres. We built the car and put it down and then went to three metres.

"He loved it when he saw it but he had been involved in making it so he saw it as it came along."

Leigh said when it came to making the car, there was "lots of trial and error".

He added: "We had many injured hay bales as the car dismounted the tracks with them on board.

"We resolved this with discs cut out of a chopping board mounted to the bottom of the side wheels.

"We also did hay bales and human trials. You could say Simon, Calden's step dad, was the guinea pig.

"He insisted on riding it first to make sure it was safe, followed by my mother Wendy who's disabled and we had to lift her into the car."

Leigh said the build has brought Charlie, Calden and himself together.

He added: "It was good fun. We worked well as a team and had lots of laughs along the way, and I feel we did something absolutely amazing.

"Calden was very cautious at first. We got him parked at the top and just let go and oh my god - we were exhausted. It is human powered to get to the top. Then you climb in the car and off you go.

"It is too frightening for me. I have had a go and Charlie has had a couple of goes.

"After months of lockdown and Calden not able to see friends, as soon as they said two families from two households could meet, we said we would built it.

"They really didn't believe me when I told them I was building a roller coaster until I showed them the video.

"Our next plan is a full steel roller coaster with a corkscrew and a loop which, of course, will rely on Charlie's maths degree coupled with Calden's roller coaster designs."