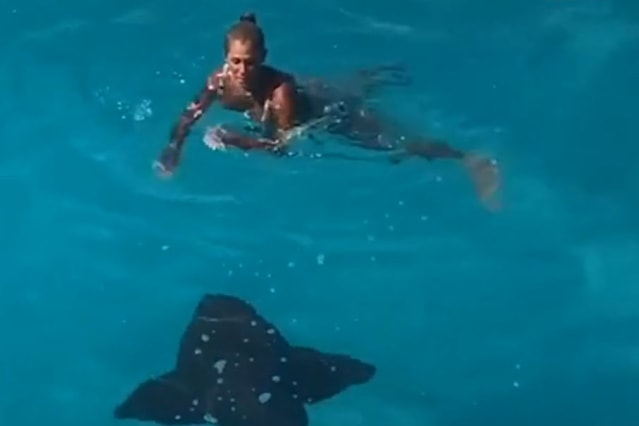 A woman was hanging out on a yacht in the Bahamas when she jumped into the water and came within feet of a terrifying sea creature.

Iso Machado was celebrating her birthday on her friend's yacht when she decided to use the inflatable slide attached to it to go into the ocean.

In a viral video uploaded by fellow passenger Kevan Sarota, Machado can be seen gliding down the inflatable slide without a care in the world.

Once she's in the water, though, she comes face-to-face with a giant shark.

"It came out of nowhere," Sarota noted in the video.

"As she was going down, one of the crew members yelled and pointed from the deck below which caught all of our attention," Sarota later told Jam Press.

"We were worried and immediately jumped in to make sure Iso was okay when it changed directions but she remained calm and it bumped her then continued on its way," they continued.

Upon further inspection, Sarota told Jam Press that he believes the creature Machado came in contact with was a nurse shark, which is typically harmless to humans.

"[Machado] was actually really happy and felt lucky to see one so close," Sarota said.

On TikTok, many users noted that they would've been terrified had they been in Machado's shoes.

"This has 'hell no' written all over it," one person said.

"I would've been screaming," another user added.

What a crazy birthday surprise! Check out kevansirota and _anthonymachado_ on Instagram for more.

This article first appeared on In The Know

Make your own relaxing face masks with these creative hacks

Dancing On Ice 2021: Which celebrities will be taking to the ice?