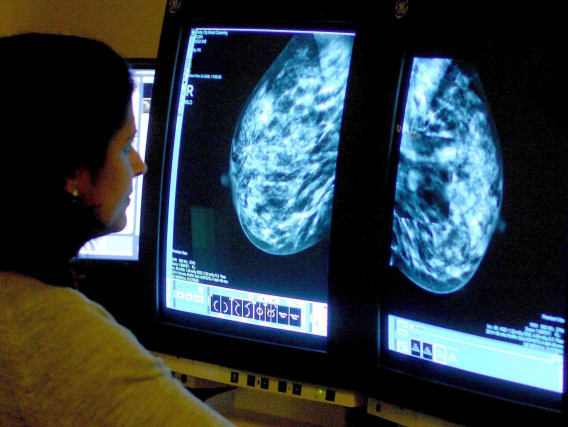 Breast cancer screening for women in their 40s could save up to 400 lives a year without a significant increase in over-diagnosis, scientists have said.

The findings, published in the journal Lancet Oncology, are based on data from 160,000 women.

At present, the screening programme is offered to women aged 50-70 every three years, but those with a higher genetic risk of the disease may be screened earlier.

But the researchers reckon that, based on the UK population of women in their 40s, somewhere between 300 and 400 lives would be saved every year if the screening age was lowered and there was a 70% uptake.

Breast cancer screening uses an X-ray test called a mammogram to spot cancers that are too small to see or feel.

Around one in eight women in the UK are diagnosed with breast cancer during their lifetime.

If detected early enough, the disease can be treated and recovery chances are good.

However, at present there is some uncertainty over whether earlier screening might lead to over-diagnosis of breast cancer.

This is because screening can often lead to detection of harmless cancers that can cause unnecessary distress and expose patients to the potential side-effects of treatment.

To find out more, scientists led by Queen Mary University of London looked at data from the UK Breast Screening Age Trial, from between 1990 and 1997.

In this trial more than 160,000 women aged 39-41 were randomised to receive either annual mammography, or the usual NHS breast screening which commences at age 50.

In the 23-year follow-up results of the trial, the researchers found that screening women aged 40-49 led to a 25% reduction in breast cancer mortality in the first 10 years.

They said that the total years of life saved from breast cancer in the intervention group was estimated as 620, which corresponds to 11.5 years saved per 1,000 women invited to earlier screening.

According to the researchers, the results suggest a “modest” over-diagnosis within the 40-49 age group, adding that any over-diagnosed cancers would otherwise be diagnosed at NHS screening from 50 years of age.

Lead researcher Professor Stephen Duffy, from Queen Mary University of London, said: “This is a very long-term follow-up of a study which confirms that screening in women under 50 can save lives.

“The benefit is seen mostly in the first 10 years, but the reduction in mortality persists in the long term at about one life saved per thousand women screened.

“We now screen more thoroughly and with better equipment than in the 1990s when most of the screening in this trial took place, so the benefits may be greater than we’ve seen in this study.”

Commenting on the research, Shirley Hodgson, a professor of cancer genetics at St George’s, University of London, said the study shows “clear evidence” that screening women aged 40 and above for breast cancer has the potential to save lives.

But she added that there is a chance that increased screening frequency, along with more sensitive modern screening techniques, has the risk of generating more false positive diagnosis (where findings suggest cancer is present when it isn’t).

Prof Hodgson said: “There was little evidence for over-diagnosis, so the clear implication from this study is that screening from 40 years does appear to save lives from breast cancer, particularly early stage (1 and 2) breast cancer.”

But Sophia Lowes, Cancer Research UK’s health information manager, said that is it not clear from the study whether reducing the breast screening age would give any additional benefit compared to the UK’s existing breast cancer screening programme.

She said: “It found an initial reduction in breast cancer deaths from screening, but this disappeared over time.

“Although of high quality, this study alone isn’t enough to call for a reduction in the screening age and further investigation of the balance of benefits and harms is needed.

“Compared to the existing screening programme, in the younger age group, six times more women would need to be screened to save one life.

“Many women received false positive results and some women would have been overdiagnosed with cancers that would never have gone on to cause them harm.”