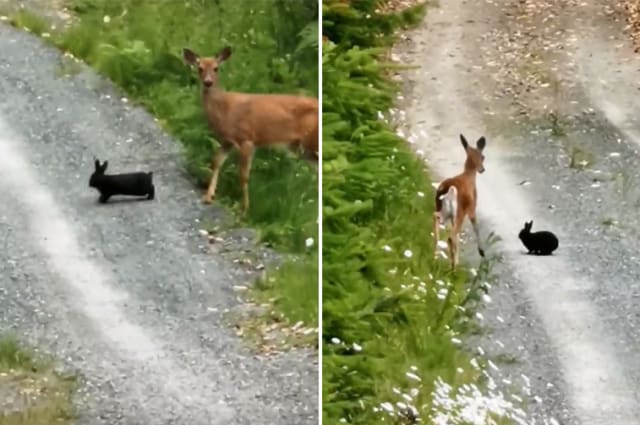 This is the adorable moment a 'real-life Bambi and Thumper' were spotted hiking through the forest together.

Footage shows the wild deer and bunny walking along a forest trail during a summer's evening last month.

As the fawn steers off track to sniff the bushes, the black rabbit waits until he can resume walking alongside his friend.

The baby deer continues to follow the path at Cowichan Valley, British Columbia, Canada, with his furry friend hopping along beside him, reminiscent of Disney characters Bambi and Thumper who strike up a friendship during a walk in the woods.

Kelly Manis, 62, who runs a pet and house sitting business Airbnbeast said: "I travel around Canada in a camper van going where I'm needed.

"I had just driven from Toronto in my camper van and had to quarantine for 14 days before seeing my mom.

"I was staying on a friend's property and saw them when I went out for a hike one evening.

"The whole time I'm holding my breath and thinking 'Oh my god this is really happening!'

"I did see them again a few days later just hanging out near a woodpile so they are friends!"