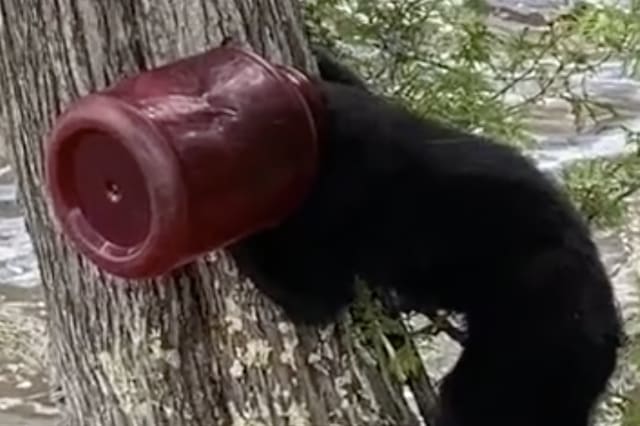 A bear cub found with its head stuck in a plastic jar while clambering up a tree near Kirkland Lake, Ontario, was freed from its predicament by two locals.

Trevor Buchmann and Greg Elder spotted the bear cub, and a Facebook post by the former shares footage of the rescue.

The footage details how Elder tried to guide the bear back down the tree, located beside Kenogami Lake, using a stick.

The cub eventually moved closer to the water below before jumping in, soon after which Buchmann and Elder managed to catch it in a blanket and remove the jar as they placed the bear in a cage.

Buchmann wrote in his Facebook post that the cub had been stuck with the item on its head for at least five days at that point.

He added that the cub had been sent to Bear With Us, a local sanctuary and rehabilitation centre for bears.

Mike McIntosh, founder and president of the centre, told CTV that the bear, named Kenny in honour of the lake he was rescued in, likely found the container at the local dump.

"Whether the cub was looking for food or not, if something was in that jug that smelled sweet or smelled good, it's going to lick it," he said.