Princess Beatrice has married her Italian property developer fiance in secret in a ceremony in Windsor Castle.

The Queen and Prince Philip attended the ceremony on Friday morning after it was delayed because of coronavirus.

According to the Evening Standard, about 20 people were in attendance, and the Duke of York, Beatrice's father, gave her away.

The palace said in a statement: "The private wedding ceremony of Princess Beatrice and Mr Edoardo Mapelli Mozzi took place at 11am on Friday 17th July at The Royal Chapel of All Saints at Royal Lodge, Windsor.

"The small ceremony was attended by The Queen, The Duke of Edinburgh and close family.

"The wedding took place in accordance with all relevant Government guidelines."

Princess Beatrice had planned to marry in the Chapel Royal in St James's Palace in London, and were due to have their reception in the garden of Buckingham Palace.

But their plans were thrown into doubt in March when wedding ceremonies were banned.

They postponed their reception, but kept things open when it came to the service itself, following government guidelines.

Queen and Philip being driven to the ceremony

The restoration of ceremonies, with 30 people attending, has been a recent relaxation of the lockdown rules in England, and meant a socially distanced day was on the cards for the couple.

Rebecca English, the Daily Mail's royal editor, spotted the Queen and Philip being driven to the ceremony on Friday morning.

It comes ahead of an in-person investiture ceremony for Captain Tom Moore, who is to be knighted in Windsor on Friday.

The Queen, 94, will use her father's sword to present the honour to Sir Tom, who raised £33million for NHS Charities together before his 100th birthday. 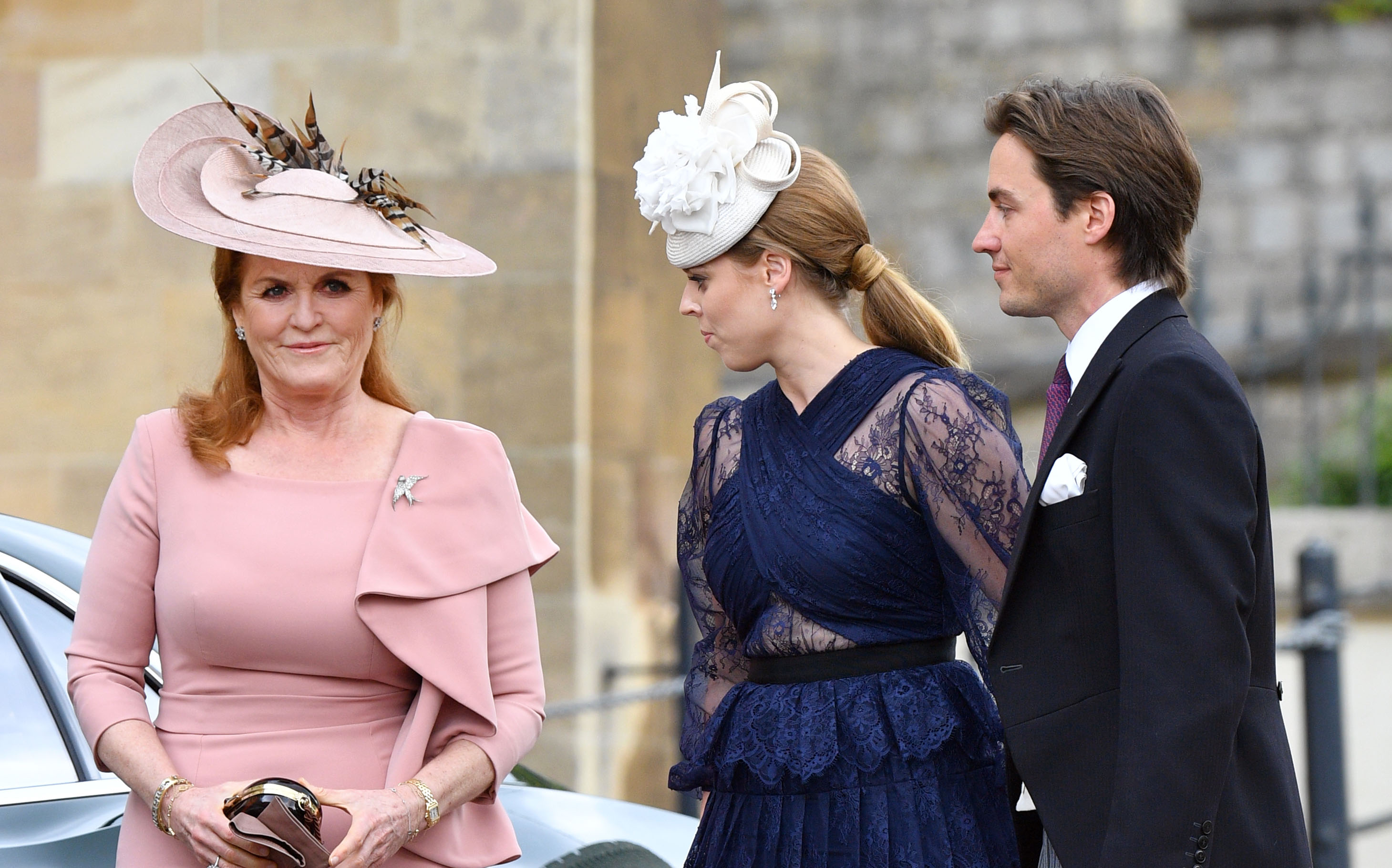 On 29 May, Beatrice's mother, Sarah Ferguson, posted a heartfelt message to her daughter along with a throwback photo.

She said: "Love you my darling Beatrice. You have given me more joy than I could ever wish for. I am so excited to celebrate yours and Edo's love when we all are out of lockdown.

"The most important thing is health and love and today I send it to you and all the other people that were getting married during this time .. so proud of you all."

Originally, Beatrice and Mozzi had hoped to use the infrastructure installed for the Queen's garden parties to host their reception.

But the Queen also had to cancel the parties, scuppering the plan.

Beatrice and Mozzi announced their engagement in September 2019, but their day quickly became overshadowed.

Beatrice's father, Prince Andrew, was forced to step back from public duties in November, after a disastrous interview with BBC Newsnight about his friendship with Jeffrey Epstein.

Her day was already planned to be smaller than her sister's, Princess Eugenie, who had a large wedding in Windsor soon after the grand affair of Prince Harry and Meghan Markle.

Buckingham Palace never formally confirmed the postponement of the wedding ceremony for Beatrice and Mozzi, but it was clear it could not go ahead.

Beatrice is not a full time working royal, but attends events like Royal Ascot and Trooping the Colour, with the Queen and other Royal Family members.

She works for Afiniti, and is vice president of partnerships and strategy.

Mozzi is technically a count, but as a British citizen, the Italian title is not used.

They will share their wedding anniversary with the Duchess of Cornwall's birthday, as she turned 73 on Friday.