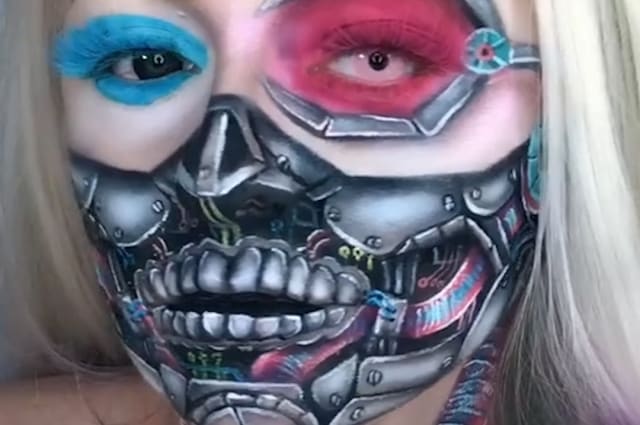 By Emerald Pellot, In the Know

Skulls have never looked this glamorous before.

Drew, of mcdrew on TikTok and Instagram, is a self-taught makeup artist. She combines bright, playful colors with cyberpunk vibes to make for some compelling looks. Drew's signature aesthetic is an exposed skeleton mouth, nose and cheekbones drawn onto the bottom half of her face.

When it comes to reimagining this feature, Drew has no shortage of ideas. Her skull makeup has been inspired by Louis Vuitton, Sailor Moon and robots, to name a few of her winning creations. She even references some of her favorite artists, like Ariana Grande, from time to time.

Doja Cat's "Streets" artwork inspired one of Drew's makeup looks last spring. The streaming sensation sports long silvery hair and lots of pearls against a pink backdrop in her "Streets" ensemble. So naturally, Drew created her own version.

She made her signature skeleton makeup pink and even painted pink vertebrae down her neck. Drew did a simple smokey eye and donned a white wig to complete the base of the opulent skull. To top the look off, she accentuated her eyes and mouth with dozens of tiny pearls. However, achieving the unique makeup wasn't easy.

"Individually placing those pearls took me FOREVER," Drew said in a video caption.

TikTok users were impressed with Drew's homage to Doja Cat.

"You are such an amazing makeup artist," one user said.

"Wow love all the bling, gorgeous," another said.

"Amazing! You are so good at doing makeup!" one person commented.

Revlon products are a staple in your everyday beauty routine