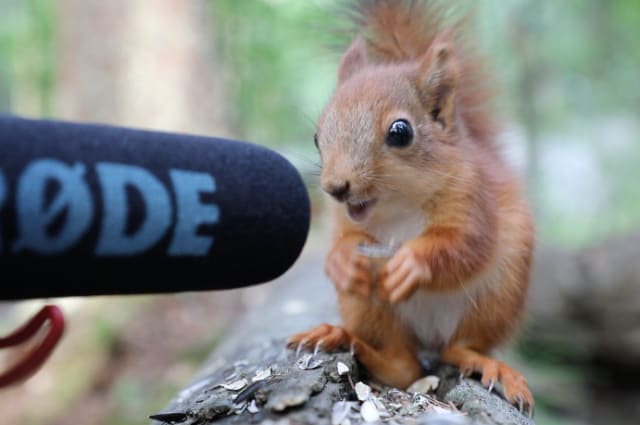 North Sweden-based wildlife photographer and zoologist Dani Connor has become a foster mom to four baby red squirrels. The squirrels' mother was hit by a car and killed so Dani trained its babies to recognize and trust her voice. It all culminated in Dani's viral tweet of one of the seven-week-old babies eating. The clip received a whopping 15 million views.

Dani is from London and had only been in Sweden for a few months when she fell in love with the local red squirrels in a nearby forest.

I put my microphone in front of a 7 week old baby red squirrel. pic.twitter.com/JrRRvE9ngN

"I was able to photograph them and differentiate the individuals and I started naming them," Dani told In The Know.

She became fond of one who seemed to enjoy posing for photos and named it Remy. Then Remy died.

"Two weeks ago, I found her body next to the road and I had photographed her that afternoon," she said.

"The following day I took her body into the forest and I laid flowers around her and gave her a funeral."

She returned to the forest where she photographed Remy and waited. Dani knew the red squirrel had babies.

"Suddenly something small and red jumped in front of me," she said.

"I stood up to have a look and it was the smallest, cutest baby red squirrel I have ever seen! When it saw me, it quickly ran up a tree and I did not see it again."

Dani spoke to a wildlife sanctuary who instructed her that the babies could not survive on their own and needed rearing in captivity. She went back the following day and eventually three babies came out to eat the food she left for them. Dani found four baby red squirrels in total.

"Since that day I have been in the forest for four to six hours every day. I have probably spent at least 100 hours with them," Dani told In The Know.

"They recognize my voice and they follow me in the forest... I am very grateful that they have survived. They have provided me with so much entertainment and joy. I did not expect to be a squirrel mum at all."

Chrissy Teigen is getting her breast implants removed