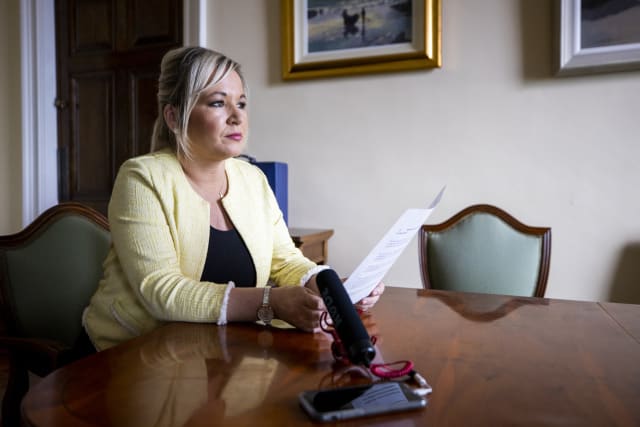 Northern Ireland’s Deputy First Minister has said she stands over her actions at the funeral of an IRA veteran that drew hundreds onto the streets of Belfast.

Michelle O’Neill has faced calls to resign after she and party colleagues attended Bobby Storey’s funeral in west Belfast on Tuesday.

A picture posted on social media by a Sinn Fein branch in the Irish Republic showed Ms O’Neill posing for a selfie close to two men, one of whom had his arm on her shoulder. The picture was subsequently deleted.

Giving evidence to her Assembly scrutiny committee, Ms O’Neill made clear she would not be quitting following the controversy.

She also declined the opportunity to apologise to anyone who might have contracted Covid-19 as a result of being among the crowds on Tuesday.

The Deputy First Minister told committee members that in the things the organisers could control – such as the size of the cortege and the numbers inside the church – the regulations were observed.

“I’m satisfied that my actions were within the regulations and the public health guidance – my actions I stand over,” she said.

The Sinn Fein vice president added: “I can only control what’s within my gift.”

Ms O’Neill, who said much of the criticism aimed at her was “political point-scoring”, said she would continue in her role as joint head of the devolved administration.

“I think the credibility of that message has been severely damaged as a result of what happened yesterday,” she said.

Ahead of the committee hearing, Mrs Foster said Ms O’Neill and other Sinn Fein members who attended had sent out a message of “do as I say and not as I do”.

“She needs to apologise and recognise the wrong that has been done, and she absolutely needs to make amends for what happened yesterday and take steps to try and build up that credibility again,” said Mrs Foster.

Mr Lewis said he understood that some people were “frustrated and angry” at what happened.

“I was a bit surprised… when you are saying to people ‘you’ve got to follow those guidelines’,” he said.

“People have given so many sacrifices over the last couple of months, particularly in Northern Ireland where we have seen people really strongly following the guidelines, we’ve seen lower levels of things because people are following those guidelines so well.”

He told BBC Radio Ulster: “I can understand people’s frustrations. It’s not something I would have done.”

Ms O’Neill insisted everything was done “in accordance with the guidelines”.

“Regrettably a considerable number of family members were unable to take part in the cortege as a result of the current restrictions, like many other families who have been unable to properly grieve or mourn the loss of a loved one in a traditional way as a result of the Covid crisis,” she told the Irish News.

Mr Swann said the scenes in Andersonstown, where roadsides were packed with people as the cortege carrying Mr Storey passed by, was a clear breach of Stormont restrictions.

Sinn Fein president Mary Lou McDonald and former leader Gerry Adams were among other high-profile party members at the service and a later commemoration event at Milltown cemetery.

Mr Swann’s weekly Covid-19 media conference was dominated by the issue on Tuesday as he was challenged on whether the executive’s credibility had been undermined.

He was asked if the incident could lead the public to question the point of abiding by the rules – the way some people did after the Prime Minister’s top adviser Mr Cummings was accused of breaching regulations during a trip to the north-east of England during lockdown.

“I sincerely hope that this isn’t the Dominic Cummings effect in Northern Ireland because in our health service we can’t afford it to be,” he said.

Little Simz discusses challenges of being an independent artist

Amateur baker decorates the most adorable macarons you’ll ever see