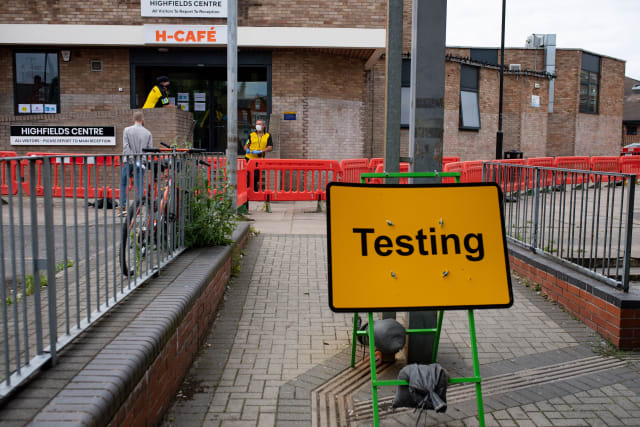 The Government has been “at best burying, at worst suppressing” crucial data local areas need to tackle coronavirus, an MP in an area with a high infection rate has said.

Bedford and Kempston MP Mohammad Yasin said that the implications of not publishing information on local cases and testing were “deadly serious”.

Local politicians have complained they have not been given access to pillar two test results – swabs of the wider population – and have had to rely on pillar one data-based cases confirmed in NHS and Public Health England (PHE) labs.

Labour MP Mr Yasin said on Wednesday he had asked Prime Minister Boris Johnson how he knew Bedford was safe to enter the next phase of lockdown easing when the Government was not publishing this “vital data” needed to make decisions to keep the public safe.

Mr Yasin added: “His trademark blustering answer dismissed my question but now we know for certain what we have for weeks suspected, that the Government is at best burying, at worst suppressing, a whole tranche of crucial health information in the midst of a pandemic.

“The implications of this are deadly serious and I will be raising this at the highest levels.”

His comments come after a PHE regional map showed the towns and cities currently suffering high numbers of cases per 100,000 people for pillar one and pillar two testing across England.

The data covers all mass testing in England, including that carried out in NHS and PHE labs, plus all community testing, drive-throughs and tests sent to people’s homes.

The map shows that those regions currently worst affected, with at least 45 cases per 100,000 in the week to June 21, are Leicester, which went into further lockdown on Tuesday; Barnsley, Bradford and Rochdale.

There are six areas in the next worst affected category – 30 to 44.9 cases per 100,000 – which are Bedford, Blackburn with Darwen, Tameside, Oldham, Kirklees and Rotherham.

PHE and the Government have faced accusations of long delays in sharing figures with regional public health experts.

While the Department of Health and Social Care (DHSC) publishes the complete testing data on a national level, it only publishes the pillar one figures for individual local authorities.

In Leicester and Greater Manchester, the number of cases has been much higher when pillar two data is included.

According to the most recent data, published on Tuesday, there have been 1,059 cases in Leicester since the outbreak began, but the city council said on Monday that the latest figures it has received show there have been 3,216 Covid-19 cases confirmed when you include pillar two figures.

Last week, the mayor of Greater Manchester Andy Burnham said the number of positive pillar one positive cases was 78 but this leapt to 465 when combined with the pillar two data.

Mr Burnham said on social media on Wednesday that the new PHE data raised questions for the Government.

He tweeted: “The biggest of all is this: why did they give the go ahead for the big re-opening on July 4 when they could clearly see what was happening in Leicester?”

Labour MP Yvette Cooper said health authorities in her constituency in Wakefield, West Yorkshire, had been trying to get hold of pillar two testing data but had not been able to.

She tweeted: “Our local public health teams, council, NHS doctors & managers in Wakefield have had to fight for months to try to get this data.

“In public health crisis, most important thing is knowing where infection is. Appalling and incomprehensible that basic info hasn’t been provided.

“The idea this could have been Ministerial choice rather than failure of competence is even more shocking. What on earth is going on?”

The British Medical Association (BMA) has said the Government needs to be “more open and transparent with local Covid-19 data” and on how spikes will be dealt with.

The DHSC has been approached for a response, but a spokesman has previously said that last week it had started securely sharing postcode-level testing data with all local authorities including Leicester.

Little Simz discusses challenges of being an independent artist

Amateur baker decorates the most adorable macarons you’ll ever see