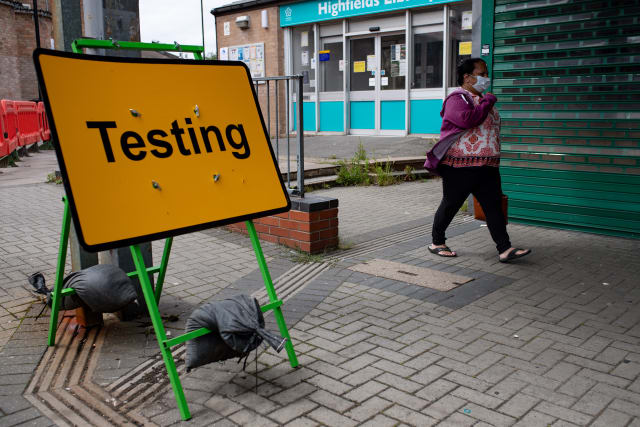 The Government and Public Health England (PHE) have been criticised for not sharing coronavirus case and testing data vital to halting local outbreaks.

But what data have local leaders been asking for and why has it not been available?

– Why have local politicians been critical of the Government and PHE?

The Government and national PHE have been criticised for not releasing full data on the number of coronavirus cases in different local authorities.

The Mayor of Leicester said he had been trying for weeks to access data on the level of testing in the city and was only given access on Thursday – days before the city’s local lockdown was announced.

Other council leaders, mayors and MPs have added their voices to the debate, also saying they have not been able to access the data they need to identify and tackle local outbreaks.

– What data are they trying to get?

Local leaders have said they want access to the pillar two data, not just the publicly available pillar one figures.

– What is the difference between the two?

Pillar one data is the number of confirmed cases of Covid-19 based on swab testing in PHE labs and NHS hospitals for those with a clinical need and health and care workers.

Pillar two is swab testing of the wider population and includes data from all community testing, drive-through centres and tests sent to people’s homes.

– Why does the Government not publish pillar two data?

The Department of Health and Social Care (DHSC) publishes the complete testing data on a national level, it only publishes the pillar one figures for individual local authorities.

It is not clear why it does not publish pillar two data on a local level.

An anonymous PHE official told the FT that non-publication was a ministerial decision.

– Why do local leaders want the pillar two data?

Using only pillar one figures will not give a complete picture of what is happening in a local area because it is limited to confirmed cases in patients and health and care workers.

In Leicester and Greater Manchester, the number of cases has been much higher when pillar two data on testing in the wider community is included.

According to the most recent data, published on Tuesday, there have been 1,059 cases in Leicester since the outbreak began, but the city council said on Monday that the latest figures it has received show there have been 3,216 Covid-19 cases confirmed when you include pillar two figures.

Last week, the mayor of Greater Manchester Andy Burnham said the number of positive pillar one cases was 78 but this leapt to 465 when combined with the pillar two data.

– Has the data now been passed to local authorities?

Prime Minister Boris Johnson said on Wednesday that “both pillar one and pillar two data have been shared not just with Leicester but with all authorities across the country”.

The DHSC said that last week it had started securely sharing postcode-level testing data with all local authorities including Leicester, so it is available continuously and at any time.

Leicester’s mayor Sir Peter said that he received the data on Thursday.

– Why is having this data so important?

Local leaders have said that having this data as early as possible allows them to identify outbreaks and take action to address them.

Leading health academic Professor Sir Chris Ham said that local leaders are much better placed than the Westminster Government to engage their communities in “limiting and responding” to future outbreaks.

– Will high infection rates lead to more local lockdowns like in Leicester?

Health Secretary Matt Hancock in May said that regional flare-ups of the virus in England would result in “local lockdown”.

PHE has said there was no threshold for determining when a local lockdown should be implemented.

Advice will be given on a case-by-case basis and decisions taken by leaders based on this advice and the specific circumstances of the area, it added.

But experts have said further local flare-ups are inevitable which means there could be more local lockdowns going forward if measures to halt the spread of the virus are unsuccessful.

How to clean false eyelashes for long-lasting wearability