Experts will continue to appear at coronavirus briefings, says Raab 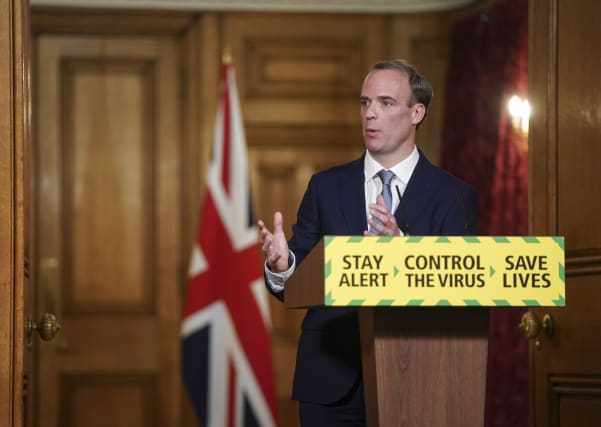 The Foreign Secretary has said the Government’s medical and scientific advisers will continue to take part in its televised coronavirus briefings but “perhaps not on a daily basis”.

Dominic Raab’s comments came in response to questioning during Monday’s Downing Street briefing over why weekly appearances by experts have reduced since the start of the month.

Earlier on Monday, a spokesman for the Prime Minister insisted there was not an issue in the Government’s relations with scientists.

Both men made their second appearance at a Downing Street briefing this month alongside Boris Johnson last Wednesday, but other experts have not appeared in June.

Professor Stephen Powis, national medical director of NHS England, has attended a briefing once in June so far after appearing eight times in May.

“I think it is also true to say that as we go down the road map and start to talk about the changes we are making, whether it is to business, schools or other areas, we will also bring other independent experts along and make sure we can answer the full range of questions that people have.”

After it was put to him that there were some questions that medical experts would be more equipped to answer than ministers, Mr Raab added: “Well, you haven’t tried me on a question I can’t answer yet but I am happy to be proved wrong.

“Look, you are right to say the scientists and the medical adviser are important.

“They will continue to attend these press conferences, perhaps not on a daily basis – they’ve got a huge amount of other work to do – and undoubtedly the politicians need to answer the judgment calls we make based on the evolving science.”

Earlier on Monday, the Prime Minister’s official spokesman was asked if there was a problem as there are now fewer appearances by the scientists.

He said: “No – last week you saw, from memory, the chief medical officer, the chief scientific adviser, you saw NHS England’s medical director, you saw Baroness Harding who is in charge of test and trace, you also saw the Health and Safety Executive and a couple of others as well…

“There won’t be an expert there every day but you will still see them.”

On Friday, Transport Secretary Grant Shapps denied reports that the chief nursing officer for England was dropped from Number 10 press briefings because she refused to defend Dominic Cummings.

According to reports, Ruth May stood down from a briefing when she refused to support Mr Cummings’ decision to move his family 260 miles to Durham to stay on his parents’ farm.

This is a 3D-printed floating house