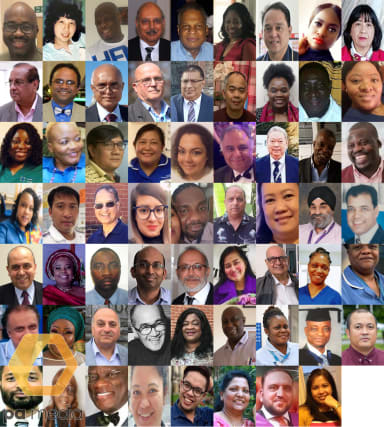 The PA news agency has verified the deaths of 166 frontline UK healthcare workers with Covid-19 since the start of March this year.

The figures include people who were working in roles shortly before their deaths where they were likely to come into contact with patients.

Staff at care homes have not been included in the figures as not enough reliable data was available.

Ninety-two of the 100 BAME workers lived in England and eight were from Wales. There were none verified from Scotland or Northern Ireland.

In England, BAME staff make up 20% of the NHS workforce. By comparison, 62% of the health workers who died in England were BAME.

The Government has been investigating why BAME communities have been disproportionately affected, with social, cultural and economic factors all thought to be possible contributors.

Joan Saddler, director of partnerships and equality at the NHS Confederation, said BAME staff appeared more likely to work in lower-level jobs on general wards, where there might be less PPE provision than in high intensive critical units.

Almost half (49%) of BAME staff whose deaths were verified by PA worked as nurses or healthcare assistants, while 30% were doctors.

“People who are dying are not in (critical care) environments — why? You could argue we are getting PPE in those environments,” Ms Saddler told the PA news agency.

“People on the wards tend to be Band 4 and 5. A lot of people don’t want to do those jobs, they are hard work.

“They are understaffed for a range of reasons and so there is something about those most difficult jobs, the people who tend to come in at that entry-level.”

A survey from the Royal College of Nursing found that BAME staff have experienced the greatest PPE shortages.

Less than half (43%) of respondents from a BAME background said they had enough eye and face protection — a stark contrast to 66% of white staff who said they felt properly equipped.

The fit of PPE could also be an issue. According to the NHS Confederation, some Muslim staff have experienced difficulties fitting facemasks and goggles over hijabs while others with religious beards have had problems with face masks.

Ms Saddler said that other factors, such as lower incomes and living standards for such workers, could also increase their likelihood of catching the virus.

“What is clear is we need to act. Even if we don’t know why we need to keep people safe,” she added.

South Wales agency nurse Leilani Medel, 41, was one of 24 Filipino workers to die as the health service struggled to cope with the virus.

Ms Medel’s aunt, Marisa Weaver, said she believes a cultural reluctance to speak up was a contributing factor in her death.

She said: “We do not want to speak and because we are so worried that we will lose our jobs and we will be reprimanded. It’s in our nature and culture that we have to oblige what we have been told.

“I know my niece did not speak that much. She did her job but she did not want to complain.

“We respect everyone and we do not want to offend even when you know your life is in danger and you need to be protected because you do not want to be scolded.”

Around three in ten of the BAME staff who died were based in London. Among them was “much-loved” GP Yusuf Patel.

His cousin, Dr Mohamed Enayat, also works in medicine and believes BAME people could be genetically more susceptible to complications from the virus, though this remains unproven.

Dr Enayat, from LMS Health, a London centre specialising in preventative and regenerative medicine,  said: “I suspect there is a genetic predisposition that we all carry, but some people manifest in our ability to mount a hyper-inflammation.

“The issue with Covid: the dangerous part is the inflammation your body mounts as an unhealthy immune response.

“Some people don’t go on to develop that and they are able to ride out the symptoms, but for those people that get sick with it, they have this hyper inflammation.

“Through our exposure to stresses and our general underlying health status, I think it probably does have a genetic composition to it.”

But Dr Enayat agreed that economic inequalities were also adversely affecting BAME communities, adding: “Health, in many ways, is a luxury good.”

“We need to work harder to educate those communities around their lifestyle choices and the impact on their health.”

An NHS spokesman said: “Ensuring that we protect all NHS staff will always remain an absolute top priority, so the NHS has asked every trust to take the precautionary measure of risk-assessing staff at potentially greater risk, and if any colleague is concerned, they should raise this within their trust and must be listened to.”

Lesley Manville joins The Crown: ‘I could not be happier’