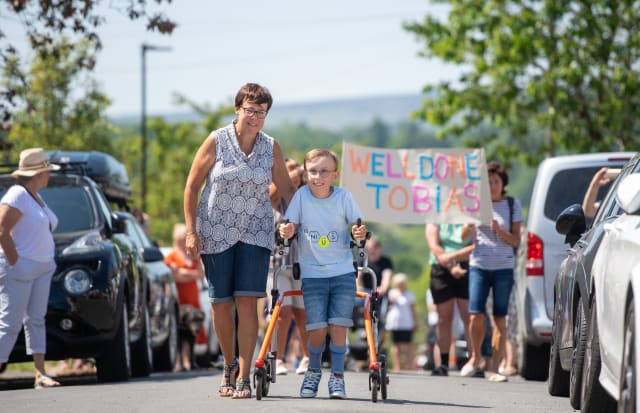 A nine-year-old boy with cerebral palsy – named Captain Tobias by supporters – has completed his “ginormous challenge” to walk a marathon using a walker to cheers from crowds of well-wishers.

Tobias Weller was described as “incredible” and “an inspiration” by celebrities and sports stars, who sent him messages of support ahead of the final leg of his journey.

The young fundraiser has raised more than £46,000 for Sheffield Children’s Hospital and Paces School by walking the 26.2 miles – or 42,195 metres – over 70 days on the street outside his home.

Tobias finished the challenge on Sunday to cheers from the whole street, which has turned out to support him throughout the challenge.

Police closed off the Sheffield road as neighbours hung bunting and balloons for the final 750m of his marathon fundraising effort.

England international Ms Morgan described Tobias, who could only manage to walk 50m when he began his challenge, as an inspiration and thanked him for raising more than 80 times more than his original target of £500.

She said: “You’ve done an absolutely incredible job so far to walk as far as you have and I know you’ve been building up and building up each and every day, which is amazing.

“Honestly, what you have done is an inspiration to so many people.

“Everyone at the hospital is so grateful for everything you’ve done, it’s absolutely amazing.”

Dame Jessica said: “I have been following your story and I just want to say I think you are absolutely incredible. What a challenge you’ve taken on.”

Mr Walker described Tobias as an “absolute superstar” and added: “What an incredible young man you are. I hear you, like many others, have been inspired by Captain Tom and you’ve raised thousands of pounds for The Children’s Hospital Charity. Thank you for that.”

The money raised by Tobias, who also has autism, will help The Children’s Hospital Charity through its emergency Covid-19 appeal and Paces School, a non-maintained special school where the ethos is on children being challenged to reach their full potential.

Ruth Liu, headteacher at the school, said the money would be used to help build a new “state-of-the-art” facility.

She said: “It’s absolutely tremendous. Such an aspirational target he set himself and just very slowly and methodically he’s worked his way through it with sheer determination, and it’s an absolutely fantastic achievement. We’re so proud of him.”

Abbie Pervin, regional fundraising manager at The Children’s Hospital Charity, added: “We’re very proud of Tobias’s fantastic achievement. Not only the amazing total raised for the hospital but also the personal determination it has taken him to walk a marathon.

“He thoroughly deserves all of the well wishes that he has received and the money he has raised will help thousands of children and families who depend on Sheffield Children’s. Thank you Captain Tobias.”

Donations can be made at www.justgiving.com/crowdfunding/ruth-garbutt-3

The world’s tallest hybrid timber tower will be built in Sydney, Australia