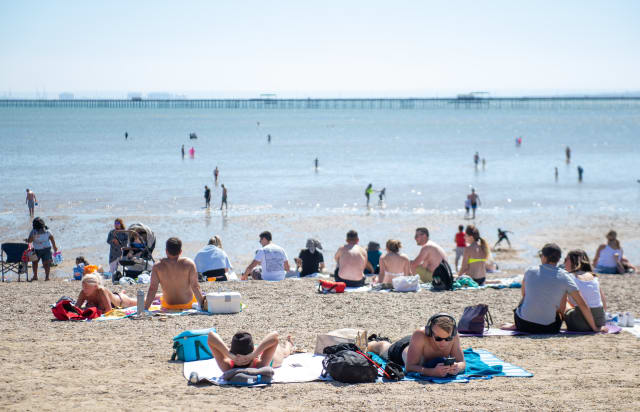 The public has been warned not to go beyond official guidance as lockdown restrictions ease further, with one expert claiming the UK could face a resurgence of coronavirus cases.

Small groups of people will be able to meet within the rules for the first time from Monday in England, and more than two million clinically extremely vulnerable people who have been shielding since March will finally be allowed to spend time with other people outdoors.

But the new freedoms, which will come into effect officially after a hot weekend which has enticed people to beaches and beauty spots, must be treated with caution, England’s deputy chief medical officer has insisted.

Professor Jonathan Van-Tam said the Government and public had a “dual responsibility” to prevent a second wave of the virus, describing now as a “very dangerous moment”.

Addressing the public’s responsibility in stark terms while he took part in the daily Downing Street briefing, he said: “Don’t tear the pants out of it, and don’t go further than the guidance actually says.”

And writing in the Telegraph, the Government’s chief scientific adviser Sir Patrick Vallance said ministers had to take “many other factors into consideration” in making decisions, and that Scientific Advisory Group for Emergencies (Sage) advice was “independent of politics”.

His comments followed earlier concern from Government advisers about easing lockdown too soon.

Four members of Sage spoke out to warn that ministers are taking risks.

And on Saturday evening Professor Anthony Costello, a former World Health Organisation (WHO) director, sent a scathing tweet predicting a possible resurgence of the virus.

He said: “We have 8000 cases daily, a private testing system set up without connection to primary care, call-centre tracing that appears a fiasco, and no digital app. After 4 months. Unless the population has hidden (T cell?) immunity, we’re heading for resurgence.”

Prof Van-Tam said scientists will be watching “very closely” how things go over the next few weeks.

From Monday in England, friends and family can meet in parks and gardens in socially distanced groups of six.

For those who have been shielding, a slight reprieve will come in the form of being able to go outside with members of their household from Monday, while continuing to follow social distancing guidelines.

Those in this category who live alone can meet outside with one other person from another household.

The easing of restrictions for those shielding follows criticism that this group had been left feeling “forgotten”.

But Phil Anderson, head of policy at the MS Society, said people would want to hear the scientific evidence behind the decision, which he described as having “come out of the blue”.

“People who are extremely vulnerable will rightly want to hear a lot more about the scientific evidence showing this will be safe for them,” he said.

While the Prime Minister and Cabinet members have repeatedly tried to shift focus from the controversy over Boris Johnson’s senior aide Dominic Cummings, it shows no sign of going away.

The Observer reported a letter sent by 26 senior UK academics and health administrators to Downing Street complained about the impact of the key adviser’s actions in driving from London to Durham with his wife and child during the lockdown.

The group also warned about a failure to enact an effective test, trace and isolate system to pinpoint and then quarantine newly infected people.

As a result, they are now “very concerned for the safety and wellbeing of the general public” as the lockdown measures are relaxed, the newspaper reported.

A poll for the newspaper by Opinium found support for the Conservatives had fallen to leave them just four points ahead of Labour, and the paper said the Tory lead has fallen by eight points in the past week alone.

Prof Van-Tam firmly stated the rules were clear and applied to everybody, when asked whether people in authority should lead by example and obey them.

The easing of England’s lockdown will also signal the reopening of schools to allow more students to return, while outdoor retailers and car showrooms are also able to reopen.

Declaring that “football is coming back”, Mr Dowden said: “Football, tennis, horse racing, Formula 1, cricket, golf, rugby, snooker and others are all set to return to our screens shortly.”

In Scotland, people can meet others from one other household at a time as long as it is outdoors, but social distancing should continue and groups must be a maximum of eight people.

People in Wales will be allowed to meet with others outdoors from Monday.

In Northern Ireland, more retailers can open and small outdoor weddings will receive the go-ahead from June 8 if the coronavirus infection rate remains under control.