Lockdown measures not being eased in ‘reckless’ way, Chancellor says 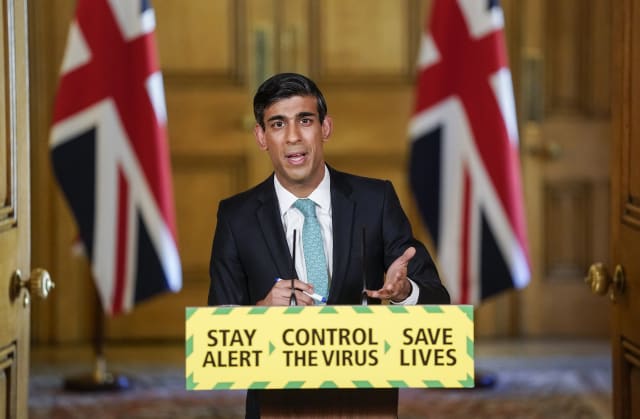 The Chancellor has said that the lockdown restrictions are not being eased in a “reckless or big bang way” and the Government is still following scientific advice.

Rishi Sunak was asked whether Prime Minister Boris Johnson’s announcement of a gradual easing of the lockdown in England had been made before the the country’s coronavirus alert level had been lowered from level four to level three.

When the alert scheme was announced by Mr Johnson earlier this month, the UK was at level four of five, which said that current social distancing measures and restrictions would remain in place.

At level three there can be a gradual relaxing of restrictions and social distancing measures.

Mr Sunak did not confirm whether the threat level was still at level four or had been lowered to level three.

But when asked if it was “risky” to relax restrictions before the alert level had been lowered, Mr Sunak told the daily Downing Street press briefing on Friday that the restrictions could be eased because the Government’s five tests had been met.

He added: “We set out the five tests very clearly and because we are now meeting the five tests, because of the heroic efforts of everyone at home, the NHS, everyone, we are in a position to carefully and deliberately start to release the restrictions.

“I wouldn’t say that that’s happening in a reckless or big bang way, as the Prime Minister set out it’s been done in quite a measured and phased way progressively to make sure that we can keep an eye on things and we’re not running before we should.”

The Department of Health and Social Care could not immediately tell the PA news agency what the current alert level was.

The alert scale has previously been included in the daily Downing Street briefing slides but has not been used since May 22.

When asked whether the Government was no longer following the science by relaxing the restrictions before the coronavirus threat level was lowered, Mr Sunak said that the Government was listening “very strongly” to scientific advisers.

He added: “There has been no change in the dialogue or relationship we have or the advice we receive.

“We remain very cognisant of the scientific advice, very engaged with it and listening to it very strongly.”

Mr Sunak’s comments come after a police and crime commissioner said it looked like Mr Johnson’s announcement that six people can meet up outdoors from Monday – made just before a weekend forecast to be hot and sunny – was “rushed forward to help ministers in a difficult position”.

But with temperatures expected to soar to 26C this weekend, there are fears Mr Johnson’s announcement on Thursday will result in a difficult couple of days for authorities.

Northumbria’s Labour police and crime commissioner Kim McGuinness said: “One of the hallmarks of the Government’s handling of this deadly pandemic has sadly been a series of mistimed and badly explained messages.

“By pre-announcing changes to lockdown ahead of a tempting weekend of sunshine, the PM must have known he was going to create a situation that is difficult to police.

“The messaging looks like it was rushed forward to help ministers in a difficult position.”

Emma Bunton: Mel B and I cried when we saw our children dancing together

Janet Devlin: I hated being dressed in ‘provocative’ outfits on X Factor