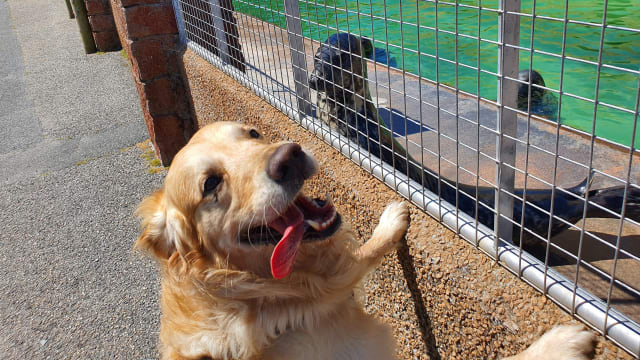 Beer company BrewDog has launched a new drink with profits going towards making hand sanitiser for the NHS, while dogs have been visiting seals after a sanctuary’s visitors dried up in Thursday’s news.

Scottish brewer BrewDog has launched a new beer in response to the Dominic Cummings controversy, with profits going towards making hand sanitiser for the NHS.

The name of Barnard Castle Eye Test Hazy IPA was voted for by fans and it is available for pre-order online.

All profits made from sales of the beer, which costs £16.95 for 12 cans, will help fund BrewDog’s production of free sanitiser for the NHS and healthcare charities.

Described as a “short-sighted beer for tall stories”, the New England, Old School IPA is “dry-hopped with pineapple, mango and a hint of lime” and is 6% ABV.

Fans were given the chance to vote on names for the beer, which included Cummings & Goings, 260 Miles, and Stay At Homes.

Dogs have provided seals with a morale boost after staff at a sanctuary noticed they were missing visitors during the coronavirus lockdown.

Staff, who have been providing extra enrichment for the animals, decided to bring their dogs in to say hello and remind them of what it is like when the sanctuary is open.

A spokeswoman from the sanctuary said: “The animals were very intrigued to see dogs again on site and enjoyed interacting with them.

“The team have also been playing music over the speaker system to help to keep the residents calm and happy.”

Four members of a family, who all work at the same hospital, have spoken of their pride in fighting coronavirus together.

Debbie Cottrell, 60, works as a specialist colorectal nurse alongside her two sons Jack, 28, an assistant physio, and Peter, 32, a psychiatrist doctor, and daughter-in-law Roxanne, 33, a junior doctor at Frimley Park Hospital in Surrey.

Debbie said: “I get very excited when I see them. Of course, at this worrying time they are working with Covid-19 patients, we all are, and I often have to refer some of my patients to see Peter.

“And if I am on the wards I see Jack working with my patients. And with Roxanne, when I go down to A&E to see patients there, it is lovely to see her there.

“I am a proud mum and I love them all working here.”

Rare large heath butterflies are being released into Manchester peatlands for the first time in 150 years after being successfully bred at Chester Zoo.

Large heath butterflies, once commonly found across the region, disappeared from Greater Manchester over a century ago following the destruction of their habitat for agricultural land.

The Lancashire Wildlife Trust collected six wild female butterflies from a surviving population and transported them to Chester Zoo where they could be bred and released into Manchester.

Heather Prince, part of the zoo’s invertebrate team, said: “Breeding and rearing butterflies in an incredibly delicate process that requires a fine balance of conditions at each part of their life-cycle.

“It is incredibly rewarding to see large heath butterflies fluttering around in their new home, and know that we’ve contributed to bringing them back from extinction in this area.”

A professional fundraiser is honouring his grandfather who was involved in the Dunkirk evacuations by cycling the distance from the French beaches to Dover every day of the 80th anniversary commemorations.

John Carpenter, an area fundraising manager for Help for Heroes, launched his solo effort after the planned Big Battlefield Bike Ride organised by the service personnel charity was cancelled because of the Covid-19 crisis.

Instead, for each of the 10 days of the original Dunkirk evacuations – from May 26 to June 4 – the 54-year-old is cycling 75km (46 miles) in memory of his grandfather Michael Mooney.

Mr Carpenter, from Chandler’s Ford, Hampshire, said: “My grandfather was a huge role model for me, especially during my teenage years.

“On the 80th anniversary of Dunkirk, it feels important to mark what he, and so many others, had to go through and I know he would have been proud of me fundraising for Help for Heroes.”