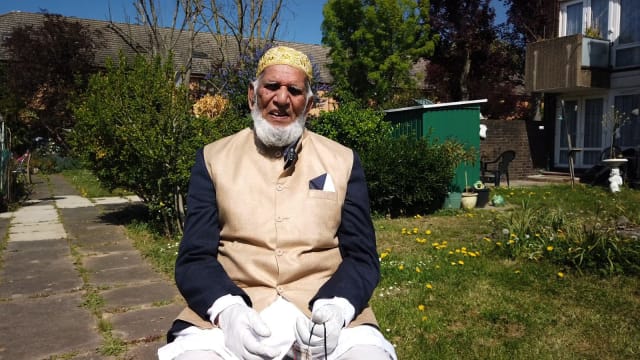 A 100-year-old man was congratulated by Labour leader Sir Keir Starmer for smashing his fundraising target, while a baby deer was saved by firefighters in Thursday’s news.

A 100-year-old man who has been walking for Covid-19 relief while fasting for Ramadan has raised more than £150,000 as he nears the end of his challenge.

Dabirul Islam Choudhury, from St Albans, set himself a challenge to walk 100 laps of his garden during Ramadan, which ends on Saturday evening.

Mr Choudhury’s challenge has so far raised over £150,000 for those affected by coronavirus in the UK and Bangladesh.

Tweeting in praise of Mr Choudhury, Sir Keir said the fundraising effort was “incredible”, adding: “He is an inspiration to us all.”

“Thank you for your generous donations,” Mr Choudhury said. “We have proved that we can stand hand to hand and shoulder to shoulder during the most unprecedented time of our lives.”

The RSPCA has praised firefighters who used an oxygen mask to save a baby deer after she almost died during a moorland fire.

Fire crews from across Yorkshire have been battling the blaze at Hatfield Moors near Doncaster since Sunday after the environmentally-important peat bogs dried out.

A red doe fawn was found by a Humberside Fire and Rescue Service crew member and was taken by the RSPCA to a rescue centre in Cheshire.

RSPCA Inspector Daniel Bradshaw said: “The fire was huge and the crews did an incredible job getting this terrified little kid to safety and helping her when she was struggling to breathe.

“I’m certain they brought her back to life and without their quick-thinking actions she may well have perished.”

A novice cyclist is on the brink of completing a ride the distance of Wimbledon to St Tropez to raise money for his friend with terminal cancer.

Joe Ogunmokun, who has not cycled since he was a child, is riding 856 miles on a static bike at his Enfield home to raise money for his friend Ben Chatfield.

Mr Chatfield was diagnosed with an aggressive brain tumour last year, shortly before the birth of his first child Ruby in July, and has not responded to radiotherapy or chemotherapy.

Friends and family are raising funds for a life-prolonging drug called Avastin, which is not available on the NHS and costs £10,000 per two-week cycle, to try and keep Ben alive to see his daughter’s first birthday.

Mr Ogunmokun said: “Ben’s an amazing, amazing man and he means the world to me… I guess right now this is the only way I can show my love and my gratitude.”

– Lottery winners make planters to give to key workers

A carpenter who scooped a £1 million lottery win has been making wooden boxes filled with flowers, herbs and shrubs to bring some cheer to key workers.

Daniel Peart, 29, and his 30-year-old wife Charlotte won the money on a EuroMillions draw in 2018.

They have spent lockdown at home in Peterborough and came up with the idea for the planters while trying to keep their children occupied.

“When the country was first put into lockdown and the schools closed, I asked Dan to make something with our children to keep them busy. We joked it was their design and technology lesson,” said Mrs Peart.

“Our children, who have been really involved, painting and decorating them with lots of bright colours, thought the local school would be a worthy recipient.”

Keepers at ZSL London Zoo say its pregnant okapi will have a “feisty” calf after footage was released of its baby kicking inside the womb.

The zoo, which has so far been closed for two months due to the coronavirus pandemic, has been monitoring the pregnancy of six-year-old Oni the okapi under lockdown.

Keeper Megan Harber said: “These new kick-a-thons are a sign that both mother and baby are doing really well, Oni is definitely going to have a feisty calf to look after in September and we can’t wait to meet him or her when they arrive.

“It’s definitely been challenging for us and the vet team to keep up Oni’s ultrasounds during the lockdown.

“We’ve had to keep socially distanced while caring for all the animals at the zoo, but it is vital that we keep track of Oni’s progress, both for her and the calf and for her species, about which surprisingly little is known by the scientific community.”