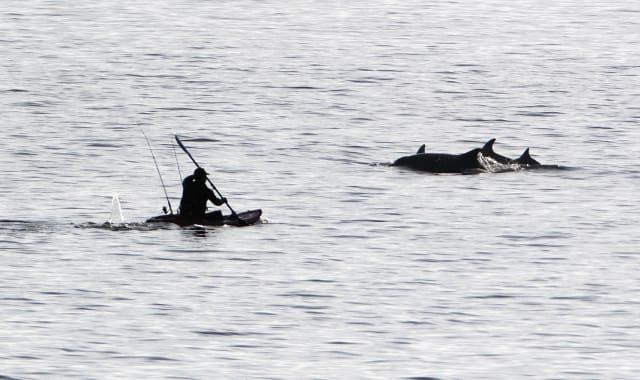 A pod of dolphins was spotted swimming off the coast of Northumberland, while face masks have been designed to enable the deaf community to lip-read, in Wednesday’s news.

A pod of around 10 bottlenose dolphins was spotted off the coast of Northumberland on Wednesday morning.

The dolphins were seen jumping out of the water between Whitley Bay and Cullercoats Bay at sunrise.

“I decided to take a look along the coast as the North Sea was like glass,” PA news agency photographer Owen Humphreys said.

“I spotted a few fins just off Cullercoats Bay and counted a pod of about seven to eight adults and two juveniles.”

An Edinburgh company is making the first face masks for the deaf community, which enable sight of mouth for lip-reading.

Breathe Easy, created by Gavin McAdam, has been inundated with orders for the products after trialling the prototypes in early April.

The company is creating around 200 masks a day and 5,000 have already been distributed free to those in need. Plans are already in place to increase production.

Mr McAdam said: “I feel really quite excited about this project and am getting a lot out of trying to do good for people in these worrying times.

“It is amazing how quickly things have progressed from a wee idea to where we are now.”

A grandmother who won £5.4 million on the lottery weeks after she lost her brother to epilepsy is spending her lockdown training a disability assistance dog to help others with physical needs.

She is working with the charity Support Dogs, which is appealing for more people to help train dogs.

Ms Sampson said she wanted to help the charity to assist people like her brother Glyn, who died in 1996 at the age of 40, following an epileptic fit.

She said: “The charity is extremely close to me, particularly as it helps people with a whole range of needs and disabilities.”

A community police officer stepped in to help a 12-year-old boy struggling with lockdown restrictions, by inviting him to join him on patrol.

Police Community Support Officer Mo Kanneh, based at Brixton police station, went the extra mile to help the young boy, who has ADHD, after he received an email from a local councillor asking if he could go and speak to the child.

The unnamed youngster, who lives in a foster home, had become increasingly frustrated with having to stay at home.

Mr Kanneh, who has been with the Metropolitan Police for 16 years, said: “I had a real heart-to-heart with the child and gave him advice on how he could be a good boy for his family. I then made a promise to him that if he was good, I would take him out with me on a cycle patrol in Brockwell Park.

“His eyes lit up at the prospect of being able to go out on patrol with me.”

A nine-year-old girl from Retford is helping raise money for a Sheffield children’s hospice by selling eggs from her 20 rescue chickens.

Lucy Broughton hopes to raise £1,000 by Christmas for the Bluebell Wood hospice, which has had to cancel its fund-raising events due to the ongoing coronavirus pandemic.

“They lay quite a lot of eggs, we’re going to start a Rainbow Eggs stall,” Lucy said.

Man Gets Hit in the Crotch With Toy