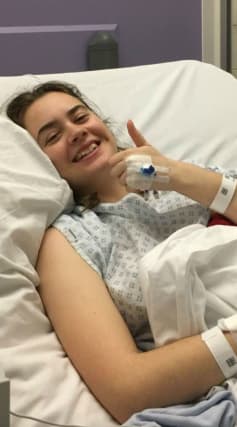 An organ donor who saved a baby’s life has urged people to consider donating while they are still alive.

Hannah Ford, 22, gave the left lobe of her liver to rescue a critically ill baby girl she did not know in December 2017.

Under a new law introduced on Wednesday, adults in England are now automatically considered organ donors and must opt-out if they do not want their organs to be used as transplants after they die.

Miss Ford, a final year veterinary student at Glasgow University, supported the campaign for the new law – but she now wants to encourage healthy people to go a step further and donate their organs while they are alive if they can.

Left lobe liver donation procedures have an average fatality rate of one in 500, and Miss Ford described being able to save a life as an “amazing experience” despite the risks involved.

She registered as a live donor in summer 2017 after hearing that an Italian restaurant owner in her hometown of Ilkley, West Yorkshire, desperately needed a transplant.

Although a transplant was found for that patient, Miss Ford had been fully assessed for suitability and continued her application – and saved the infant a few months later.

Miss Ford, who spent five days in hospital recovering from the operation, said: “I’d definitely donate again, it’s been two-and-a-half years since my surgery and it’s had no negative effects on me, and I’ve had the opportunity to meet an amazing community of people through transplant sport.

“My transplant co-ordinators give me updates about my recipient and last I heard she was doing well, which is so great to hear.

“Donating is obviously not risk-free, and I was lucky not to have any complications, but it’s something I’d definitely encourage people to do if they’re thinking about it.

“I think the passing of the new donor law is great and will hopefully save many lives.

“I know a lot of people would be happy to donate organs after their death but never get round to signing up to the register.

“The opt-out system still gives people control over what they want, but means that everyone who wants to donate should be able to.”

About 15-20% of patients on the transplant list die or are removed each year whilst waiting for an organ, and more than 3,500 people are currently on the waiting list, according to the latest NHS figures.