Uplifting news: A knitted model hospital, and a £14,000 fundraiser for charity 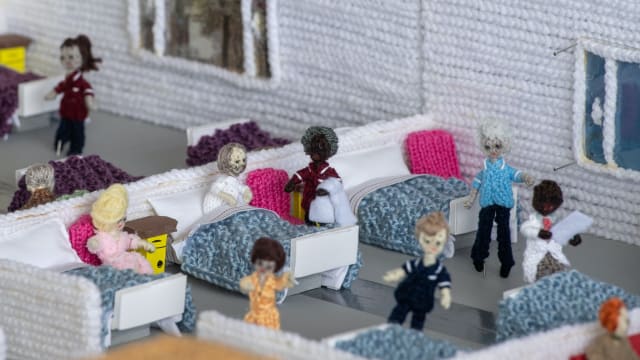 A great-great-grandmother has created a model hospital called Knittingale, while a young disabled man has raised over £14,000 for charity with his 2.6 Challenge, in Tuesday’s news.

A great-great-grandmother is knitting a model hospital called Knittingale to raise funds for the NHS.

Margaret Seaman, 91, is creating the woollen masterpiece at the home she shares with her 72-year-old daughter Tricia Wilson in Caister-on-Sea, near Great Yarmouth.

The Knittingale Hospital will have four wards, an X-ray department and a coffee shop, and her friend has knitted figures of nurses, doctors and patients to go inside.

More than £2,800 has been donated to her JustGiving page so far, with funds to be shared between three hospitals in Norfolk.

“People talk about being bored, I’m never bored,” Mrs Seaman said. “I can’t do other things that I used to – but I can still sit and knit.”

A disabled man has been described as “determined” for taking on the 2.6 challenge in a walker for charity.

Gabe Judge, from Cornwall, walked 0.26 miles on Saturday and Sunday to raise money for Scope, and has increased his challenge to 2.6 miles as his fitness has improved.

The 21-year-old has cerebral palsy, autism, epilepsy, and is blind, but has raised more than £14,000 for the disability charity with his efforts.

His father, Simon Judge, said: “This challenge is a tough one for Gabe, but he’s always been determined. We give him as much independence as we can, and his walker really helps him with that.

“Since he got his walker from the college he’s been practising a lot, doing short walks to build up to the challenge. We stay on hand to correct his course if he isn’t going straight, but he’s doing it all under his own steam.”

The easing of coronavirus lockdown measures in England has seen members of Britain’s oldest swimming club back in the waters of Hyde Park’s Serpentine lake.

With social-distancing guidelines in place, the Serpentine Swimming Club is back in action in the Lido area of the London lake after closing to the public on March 17.

Joe, a member of the swimming club, said: “Today’s swim is the first swim I’ve had in months. So it’s really good to be back.

“It seems to be a breeze, people are social distancing, I’ve got my hand sanitiser, people are good around here, it’s lovely.”

A schoolboy wrote to his headteacher asking for the recipe for his favourite school dinner when his father’s lockdown attempt at mince and dumplings failed to come up to scratch.

Arthur Dawson, eight, has been missing his lunches at Langley First School in Whitley Bay, North Tyneside, since it closed due to the coronavirus.

In the handwritten note, Arthur said: “Dear Mr Jones, I have missed you. But what I have missed most is the dinner ladies’ mince and dumplings.”

– Celebrities send messages of hope to LGBTQ+ youth in lockdown

Caitlyn Jenner and Stephen Fry are among the stars sharing messages of hope with members of the LGBTQ+ community struggling with life in lockdown.

The British LGBT Awards and It Gets Better UK have teamed up for the #InThisTogether campaign which launched on Tuesday.

Jenner and Fry were joined by others including Queer Eye’s Bobby Berk, I’m A Celebrity star Adele Roberts and Oscar-winning screenwriter Dustin Lance Black in sharing a message.

Fry, who married husband Elliott Spencer in 2015, recorded a video in his home library, saying: “We will get through this. We have to stay positive, if we can, and look towards brighter days ahead.

“I’m sending love to you all: stay safe, and snug and comfy and cosy, and confident. Lots of love.”