Teaching unions to work with Government on re-opening of schools 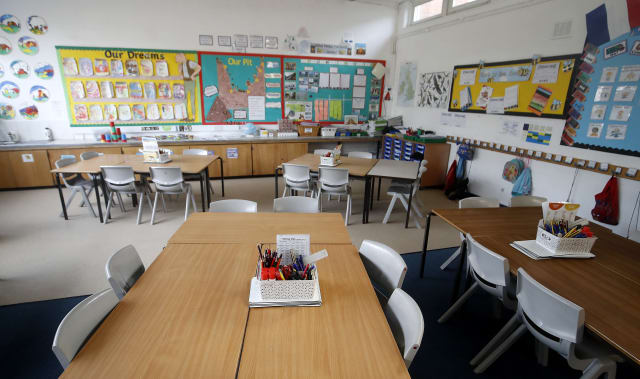 Teaching unions have insisted they are willing to work with the Government to begin re-opening schools in England – provided it can be done safely without risking a renewed coronavirus outbreak.

Pressure on the unions has increased after the Children’s Commissioner for England called on the two sides to “stop squabbling” and agree on a plan for a phased re-opening of primary schools from June 1.

Anne Longfield said she was in “despair” at the increasingly entrenched positions being taken by the two sides, in which the interests of children were being ignored.

However Patrick Roach, general secretary of the NASUWT union, said members supported schools re-opening provided they could be made “Covid secure” and it would not put public health at risk.

The teaching unions held talks on Friday with Government scientific advisers amid concerns that Boris Johnson was moving too quickly to ease the lockdown restrictions in England.

The meeting, however, was inconclusive with unions complaining that it raised more questions than answers.

Mr Roach said teachers needed “unequivocal guidance” from the Government that there would be “strong controls” in place which would satisfy both teachers and parents that it was safe to return.

“We are continuing to say to Government, but also to schools and employers, that we are here, we want to work with those employers to put plans in place to see whether schools can be ready for re-opening from June 1,” he told the BBC Radio 4 Today programme.

“We want schools to be re-opened, we want children to be safe and we want staff to be safe. It is not a zero sum game here. It is about ensuring that we get back to a place where we can return to some form of normality.”

However Ms Longfield said that until a vaccine was found, there would have to be a managed approach to risk.

“My worry within all that is that the needs of children and the best interests of children are disappearing from view,” she told the Today programme.

“There are really strong reasons why children need to get back into school. It is really imperative to see the can-do willingness to work together that we have seen in other parts of society.

“None of us want to put children, or indeed staff or parents, into any kind of situation that is unsafe. But until we get a vaccine we are going to have to be managing risk.”

He said that a similar phased re-opening in Denmark had not led to an increase in the transmission rate of the disease.

“It is very harmful for children and complicated for families if their children aren’t in school,” he told the Today programme.

“It is clear that although children do get infected – and the evidence is that they are infected probably as often as older people – nevertheless they show less symptoms and almost certainly transmit less than older.

“Class sizes are being kept low, not all school years are going back, so it is being done in a very cautious fashion.”

Meanwhile the Royal College of GPs (RCGP) has written to Health Secretary Matt Hancock calling for the Government to establish a “joined-up comprehensive” strategy on coronavirus testing.

RCGP chairman Professor Martin Marshall said the “arbitrary focus” on numbers of tests had left some patients – such as those in care homes – vulnerable to infection.

“As we ease lockdown over the coming weeks and months, it is essential that the profession and patients have full confidence in the approach to test, track and trace,” he said.

“In the absence of a clear strategy and with delays in social care planning, patients have been left vulnerable.”