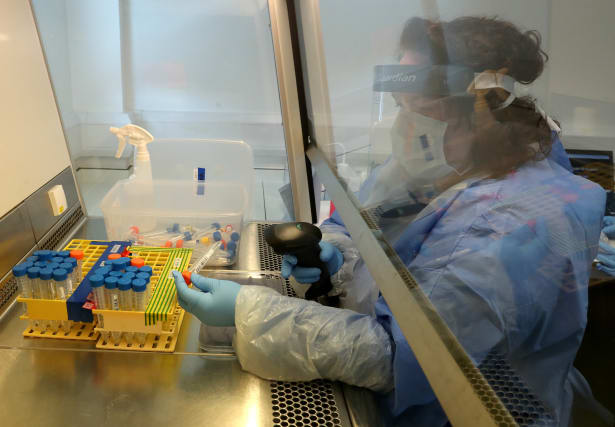 Frontline workers, including those in the NHS, will be the first to get a new antibody test for Covid-19, England's deputy chief medical officer has said.

Professor Jonathan Van-Tam said it was clear that people who had Covid-19 generated an antibody response, but it would "take time" to understand whether in all cases people developed immunity against coronavirus.

He said data needed to be gathered over time to understand whether any immune response offered life-long protection or just for a few years.

Public Health England (PHE) has approved a new test from the pharmaceutical giant Roche after experts at its Porton Down facility gave it the green light.

The test – which Prime Minister Boris Johnson has previously called a "game-changer" – picks up 100% of cases where somebody has had coronavirus in the past, and can be used on people who experienced no symptoms.

Prof Van-Tam said the test would be "incredibly important" in the weeks and months ahead, telling the Number 10 press briefing: "I anticipate that it will be rapidly rolled out in the days and weeks to come – as soon as it is practical.

"I also anticipate that the focus will be on the national health service and on carers in the first instance."

Experts believe those who have had Covid-19 develop a degree of immunity, meaning the test could prove a useful tool for helping to ease lockdown restrictions.

Number 10 said the new antibody test would "certainly" be available on the NHS, but commercial discussions with Roche are ongoing.

The Prime Minister's official spokesman said the idea of an "immunity certificate" was also still under consideration if science showed that people developed immunity to Covid-19.

Professor John Newton, national coordinator of the UK Coronavirus Testing Programme, said although it was still unclear to what extent the presence of antibodies indicated immunity, the test was a "very positive development" and the test was a "very reliable marker of past infection".

He added: "This in turn may indicate some immunity to future infection, although the extent to which the presence of antibodies indicates immunity remains unclear."

Roche said it could supply hundreds of thousands of the tests each week. The tests run on fully-automated equipment already widely installed by Roche at NHS sites across the UK.

The pharmaceutical firm said it would prioritise tests for distribution via the NHS before looking at how they may be sold to individuals.

Professor Sir John Bell, regius professor of medicine at Oxford University, said the development of the antibody test was "a good result".

He told Radio 4's Today programme: "It's a step in the right direction. In the evolution of these antibody tests, to get one that works really well is a major step forward."

Sir John said antibodies "stick around probably for a year or two", adding that the Roche test was the "best approved test available on the market now".

Speaking on BBC Breakfast, Mr Argar said: "We're in discussion at the moment with Roche on this.

"It's only just gone through the Public Health England assessment as being reliable, as doing the job, and therefore we are having those discussions.

"But we are keen to get as many as quickly as we can and get them out, primarily to the front line first, the NHS, social care and then more widely."

Mr Argar stressed that the public could not yet get their hands on the test, saying: "We're not in a position yet to roll it out to the public and have those tests ready to go."

A Department of Health and Social Care spokeswoman said: "We are exploring the use of antibody testing across the NHS and ultimately the wider public.

"We are delighted that devices are progressing through validation, and are actively working on our plans for rolling out antibody testing and will make announcements in due course."

News of the test comes as:

– An average of 148,000 people in England had Covid-19 between April 27 and May 10 (lockdown period), according to new estimates by the Office for National Statistics – the equivalent of 0.27% of the population.

– Transport Secretary Grant Shapps said more than half of people on the Isle of Wight have now downloaded the NHS contact tracing app.

From today, you can meet one other person outside your home. But you must stay alert, by staying 2 metres apart. #StayAlertpic.twitter.com/X6yC7AqSx7

The findings come as A&E attendances and emergency admissions to hospitals in England have fallen to their lowest figure on record in the face of coronavirus.

The number is the lowest for any calendar month since current records began in August 2010.

NHS England, which published the figures, said the fall was "likely to be a result of the Covid-19 response" – an indication that people have been staying away from A&E departments because of the coronavirus outbreak.

This is the lowest number reported for any calendar month since current records began.

Data on all cancer referrals also showed a drop of 8%.

Lynda Thomas, chief executive of Macmillan Cancer Support, said: "Cancer must not become the forgotten 'C' in this pandemic.

"Government guidance for urgent cancer services to continue during the virus did not happen uniformly and now it is vital that we see comprehensive plans for how the NHS will catch up."