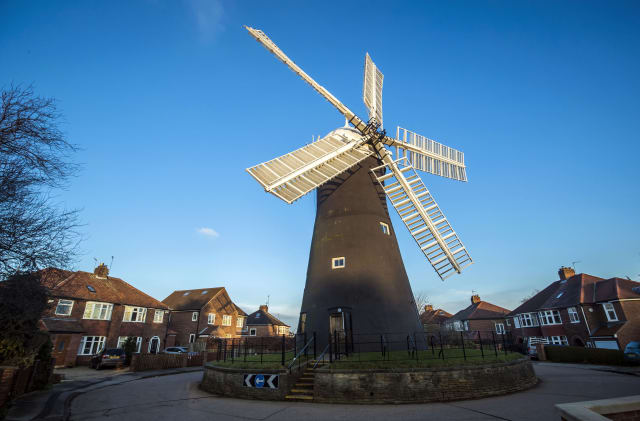 Windmill volunteers who were due to celebrate the visitor attraction’s 250th anniversary this year have put events on hold and ramped up flour production to serve their local community.

Holgate Windmill in York produced a third of its typical annual output in April alone, such is home bakers’ demand for flour during the lockdown which has left supermarkets with bare shelves.

Teams made up of three volunteers are milling on Sundays, Tuesdays and Fridays to keep the heritage site’s shop stocked for customers, as well as supplying local commercial clients, with spelt and normal wholewheat flour.

Stephen Potts, secretary of the Holgate Windmill Preservation Society, is one of the volunteer millers.

The consultant architect worked on the restoration project which saw the 1770-built Grade II listed windmill brought back to working life in 2012, after it shut in the 1930s.

He said: “We have teams coming in three times a week.

“Last month we did a tonne of grain – that’s a third of our year’s normal output, just in April – so you can tell it has gone a bit berserk.”

Mr Potts said the mill was fulfilling its social role, making sure local people had access to flour.

The shop retails a 1.5kg bag of wholemeal flour for £2.75, made from wheat grown 10 miles away in Selby, and the proceeds were much-needed as the windmill would normally make most of its income as a visitor attraction.

The mill uses wind power when possible, but an electric motor is needed to drive the half-tonne French Burr stones on the days when its five sails are still.

Even before the coronavirus, volunteers would routinely use face masks when milling because of the dust, Mr Potts said, and the teams of three millers keep a safe distance apart when working, he said.

Planned celebrations to mark its 250th anniversary will now take place in 2021, the trustees have agreed.