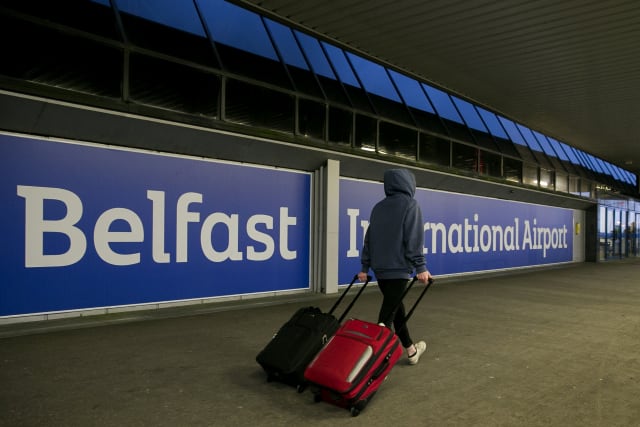 Bosses at Belfast International Airport have written to the Government asking for clarification over the prospect of a 14-day quarantine period for all travellers coming to the UK.

A spokeswoman for the Northern Ireland hub said it has not been consulted on the plans which it fears would have a “serious effect” on both the airport and the region’s economy.

Prime Minister Boris Johnson will reportedly announce the mandatory quarantine on Sunday evening as part of measures aimed at avoiding a second peak of the coronavirus pandemic.

Under the plans, which are expected to be implemented by early June, all passengers arriving at airports and ports will be required to provide an address at which they will immediately self-isolate for 14 days.

Commenting on the prospect of a 14-day quarantine for travellers coming into the UK, a spokeswoman for Belfast International Airport said: “We have received no official confirmation on the Government’s plans so we are unable to make a specific comment.

“However, we can confirm that Belfast International Airport has not been consulted on this move.

“We have written to government asking for clarification and outlining the serious effect this would have not only on our business but also, and more importantly, on the economy of Northern Ireland.

“We will continue to work with government on this issue and also with the airports trade association, the AoA.”

The Times reported that “authorities will conduct spot checks”, with punishments for those not adhering to the rules including “fines of up to £1,000” and deportation.

According to the newspaper, travellers from Ireland, the Channel Islands and the Isle of Man will be exempt from the quarantine.