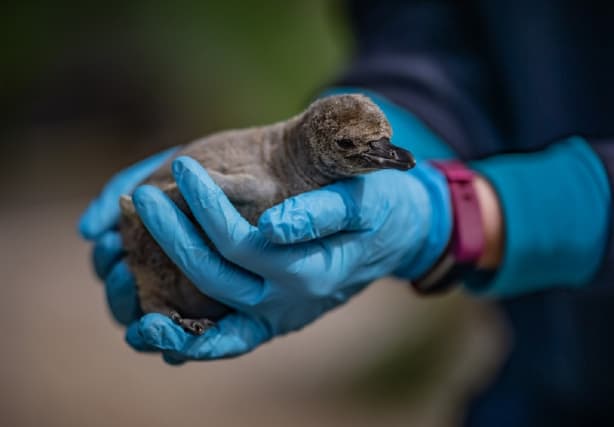 Three housemates spent 26 hours dancing in their basement for charity, while penguin chicks at Chester Zoo were named after NHS hospitals in Tuesday’s uplifting news.

Three housemates spent 26 hours dancing in their basement and raised more than £6,000 for a women’s aid charity.

Lucy Furneaux, 25, Grace Marjot, 24, and Nathalie Dixon Young, 24, were inspired by the 2.6 challenges that took place in lieu of the London Marathon.

The housemates set up the disco in their basement, with a Zoom call available for people to join and cheer them on.

The three raised £6,083 for Solace Women’s Aid, a charity that supports women and children experiencing domestic abuse in London.

Lucy said: “Solace needs £150,000 in extra resources during the crisis. It seemed like an easy way to do our thing for a charity that has really been hit hard.”

Keepers at Chester Zoo have named five newly hatched penguin chicks in tribute to the NHS.

Born between March 26 and April 14, the Humboldt penguins have been named Florence (after Florence Nightingale), Thomas (after St Thomas’ Hospital), Bevan (after NHS founder Aneurin Bevan), Arrowe (after Arrowe Park Hospital) and Countess (after the Countess of Chester Hospital).

Anne Morris, lead penguin keeper at the zoo, said: “Each year the team chooses a new naming theme for the chicks.

“Given everything that is happening around us, we decided to name this year’s class after NHS hospitals in acknowledgement of our wonderful NHS heroes, just as a thank you from everyone here at the zoo.”

A second “highly respected” centenarian has taken to his garden to raise money for Covid-19 victims amid lockdown restrictions and while fasting for the religious festival of Ramadan.

Dabirul Islam Choudhury is raising money for those affected by the virus in the UK and Bangladesh by walking laps of his community garden.

His son, Atique Choudhury, told BBC London: “When we started, we started at a small pace, but he’s been increasing his number of laps he’s doing.

“The problem we have is that we have to try and stop him because he wants to carry on.”

Dozens of sheep were spotting flooding down a deserted street in Turkey as people stayed at home during the coronavirus lockdown.

The sound of bells and baaing could be heard as the unusual traffic passed through the empty roads in Atakum, in Samsun, on the northern Black Sea coast.

The city was under a four-day quarantine, along with 30 others, as Turkey sought to prevent the spread of the virus.

A nine-year-old cyclist clocked up 256km as he raised funds for the homeless on a virtual ride in his kitchen.

James originally set himself a target of 200km but with sister Elise, 12, and brother Benjamin, six, cheering him on, he managed an impressive 256km.

“I had been thinking about people living without homes and wondering where they were going to go during the coronavirus and who was going to look after them with social distancing,” said James.

“It has definitely made me think about helping people in need and I’d really like to do this again.”