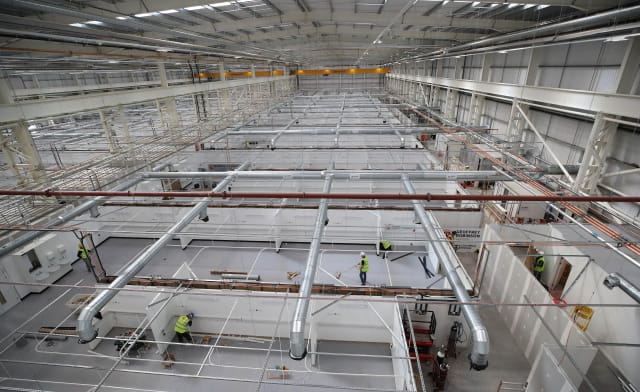 A new Nightingale hospital for the North East of England can be adapted to meet changing clinical needs, the Health Secretary has said.

Ant and Dec, sporting heroes Alan Shearer and Ben Stokes, actor Jimmy Nail and TV presenter Steph McGovern were among those paying virtual tribute to the hard work that has gone in to fitting out a new industrial unit on the outskirts of Sunderland.

In a video beamed into the opening ceremony, Matt Hancock praised the NHS staff, military, contractors and volunteers who turned it into a 460-bed hospital in weeks.

He said: “Of course, we all hope that these extra beds will not all have to be used but I know you built this facility in a way that means you can adapt the hospital to changing clinical needs as work through the emergency and into the recovery phase continues.”

The official opening of the Sunderland Nightingale by the Countess of Wessex followed the news that others elsewhere in the country will be mothballed.

In a video message, he said: “Although it pleasingly looks as though we may be coming through the peak of the number of hospital in-patients, the reality is coronavirus is going to be with us for months if not years to come, so it makes absolute sense to have the buffer capacity in the event it is needed.

“There’s no doubt, whether it is for coronavirus patients, or convalescence or rehabilitation or other types of patients, it makes complete sense to have this reserve capacity that the Nightingale Hospitals represent.”

Stars and celebrities paid tribute to the workers who made it possible in a series of videos played at the ceremony.

Ant, in a split screen with his TV partner Dec, said: “Even if it is not needed, it has been a magnificent feat of pulling together and the speed of the transformation will be an enduring symbol of what the great people of this area are capable of.”

He said it was an honour to follow in the footsteps of Captain Tom Moore – now a Colonel – who last month was asked to open the Nightingale Hospital in Harrogate.

Steph McGovern, who is from Middlesbrough, said: “The fact you are going out there and looking after everyone in this time, which is just mad, and putting others first, before yourself – you are amazing.”

Ben Stokes added: “Your continuous hard work is massively appreciated by all of us, you really are the superheroes of today.”

The site, which is beside the Nissan car plant and close to the A19, was created for patients from the across the North East and North Cumbria and will be run by the Newcastle Hospitals NHS Foundation Trust as it has specialist knowledge of infectious diseases.