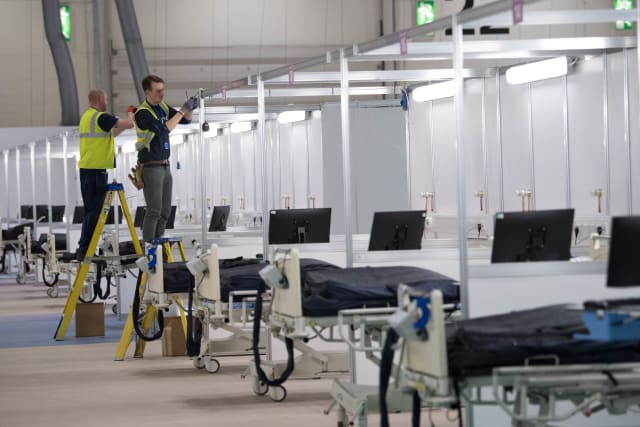 It would have been “foolish” not to plan for extra capacity to tackle the coronavirus, NHS England’s national medical director has said.

Professor Stephen Powis said that the extra capacity provided by the newly built Nightingale hospitals may still be needed, despite reports of a high number of beds lying empty.

The first of the emergency field hospitals to treat coronavirus patients was opened in east London’s ExCel centre at the start of April.

Asked at the Government’s daily press briefing if the hospitals were built in error, Prof Powis said: “Absolutely 100% not.

“If you wind the clock back a month or two, we were looking at an increase in the number of cases, infections, in the UK.

“We were watching images from around the world of health systems that were overwhelmed and we had not put in place, were about to put in place, a series of social distancing measures not absolutely knowing how the public would respond to that.

“And it would have been foolish to have not planned for extra capacity within the NHS. We did that in a number of ways including the Nightingales.”

Prof Powis continued: “The fact that we have not needed to use all that capacity is actually good news because it means that the public have complied with the social distancing measures, they’ve started to flatten that curve and we’ve seen fewer admissions and ultimately fewer deaths than we might have seen if this virus had just been left to spread unchecked.

“And the very early worst case scenarios that no country has let play out would have meant many, many, many deaths and an awful lot of pressure on health services.

“So I think you would have been a hundred, a thousand times more critical if the NHS had not put in that extra capacity and had become overwhelmed.

“You would be quite rightly asking us why we had not gone every mile that we could possibly go to, to put in that extra capacity.”

He concluded: “So the Nightingales were not built in error and we may still need them.

“We are not through this yet and although government policy and the scientific advice is to try and ensure that the virus does not start to spread widely again, we can never absolutely be certain.

“And therefore for the months ahead, we need to maintain that extra capacity until we have more certainty.”